Theatre Horizon Presents a Powerful IN THE BLOOD 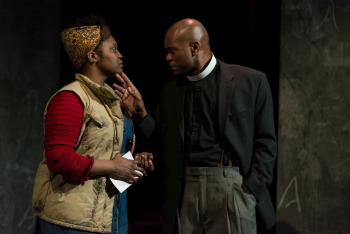 In the Blood at Theatre Horizon provides audiences with a compelling and powerful play about the struggles of a homeless mother of five children. This play is Suzan-Lori Parks’s urban retelling of Nathaniel Hawthorne’s The Scarlet Letter. This production of In the Blood, under the direction of Pirronne Yousefzadeh, is intense, genuine and affecting.

The plot of In the Blood borrows aspects from Hawthorne’s The Scarlet Letter, but Parks bases this story around the main character, Hester, and reimagines Hester’s life as what it would be living in extreme poverty in modern day and raising five children. This show really hits home the idea of not only the reality of homelessness in society, but also how judgmental society is in regards to people who are homeless and living in abject poverty. This production was incredibly powerful and well done; it provided me a great deal to think about and I am still affected by the play.

The first scene of In the Blood depicts a group of people speaking in unison about Hester, and delivering verbal attacks on her character. This 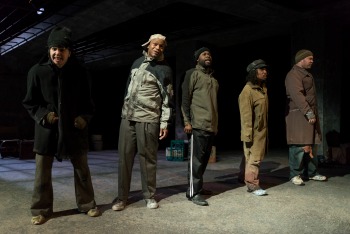 particular scene not only grabbed my attention, but  was a reminder of how critical people can be of each other. The cast of this show, other than Hester, play dual roles; each plays a child of Hester, and they also embody a character that uses or abuses Hester in some way. Playing the role of Hester, a mother who is trying to survive and raise her children is Ashley Everage. Everage makes her character’s plight relatable. Throughout the entire play, she refers to her children as her “five treasures, five joys.” In this, she is reminding herself as well as the audience that she does not think of her kids as a burden, but as a joy, and she wants better for them. Everage puts so much heart and emotion into every word and action on stage that by the end of the show the audience has fully experienced her emotional journey. The rest of this cast Akeem Davis, Christina May, Forrest McClendon, Sam Sherburne and Cathy Simpson play Hester’s children and characters that revolve around Hester’s life. As their adult characters they all deliver confessions related to Hester that are chilling and disturbing. The cast play their roles with passion and conviction and their delivery of these confessions make them even more powerful and shocking. This entire cast is dedicated to the message of this production, and I applaud the cast and Theatre Horizon for this profound and moving production of In the Blood. This is one show this season that not only is compelling and thought-provoking, but it also brings attention to a topic that needs to be considered and discussed within our communities. It will also move you and possible make you reconsider you preconceptions related to this topic. 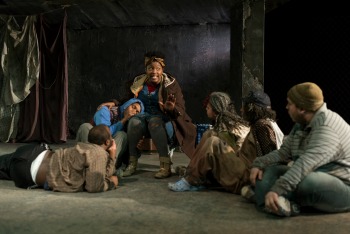 There are moments in this play that are poignant and will make you think about how we view poverty within our society. Reverend D. utters at one point, “We like our poor at arms length.” The social worker utters, “I walk the line between us and them.” These are just a few of the moments that really speak to how we treat the homeless in society. In the Blood will definitely give audiences something to ponder and discuss after the show. In addition to the message of the play, Theatre Horizon offers a new program, “Imagine No Homelessness.” This includes a post-show dialogue with actors and community partners as well as a student art exhibition.

The Design Team also needs mentioned for creating a realistic set that depicts an urban environment reminiscent of life underneath a city bridge. Brian Dudkiewicz created the cityscape environment as the Set Designer. Cecilia Durbin is the Lighting Designer. Janus Stefanowicz designed the costumes. In addition, Larry Fowler is the Sound Designer.

In the Blood runs at Theatre Horizon through May 9, 2015. For more information and tickets visit their website, www.theatrehorizon.org or call the box office at (610) 283-2230.

Final Thought: In the Blood at Theatre Horizon is intense and passionate. It is a production that should not be missed this season with its powerful message and strong performances.