Review: BEAUTIFUL at Hershey Theatre is an Emotional Journey 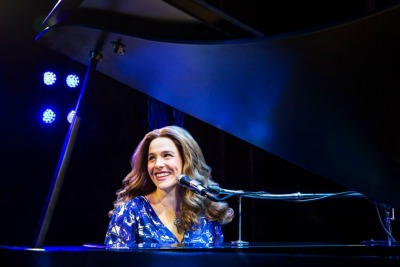 One of the things I love about going to the theatre is when I leave a show learning something new. And, this is exactly what happened when I went to see Beautiful: The Carole King Musical tour at Hershey Theatre. I thought I knew her music, I have always enjoyed her songs such as “So Far Away,” “I Feel the Earth Move, “Beautiful,” and “Where You Lead,” which consequently also serves as the theme of The Gilmore Girls. Although I did not know about her voluminous songwriting career, and it is extensive. In addition to coming away from the show learning something new, I also thought the show was extremely well done. The performances are solid, the vocals are incredible and the story of the show is one that is engrossing. If you have not experienced Beautiful, I would highly recommend going to see the show because you will have a great time at the theatre.

Beautiful: The Carole King Musical is considered a jukebox musical in that it uses previously released popular songs as its musical score. However, I would also mention this show provides the audience with a glimpse into the life of Carole King. It tells the story of how she started a songwriting career, her relationship with Gerry Goffin and her friendships with Barry Mann and Cynthia Weil. Beautiful made its Broadway debut in 2014 starring Jesse Mueller as Carole King and Jake Epstein as Gerry Goffin. Doug McGrath wrote the book for the show. The show won several Tony and Drama Desk Awards for the 2014 season in addition to winning the 2015 Grammy Award for Best Musical Theatre Album.

The production of Beautiful, under the direction of Marc Bruni which is currently playing at Hershey Theatre is not only an entertaining show, but 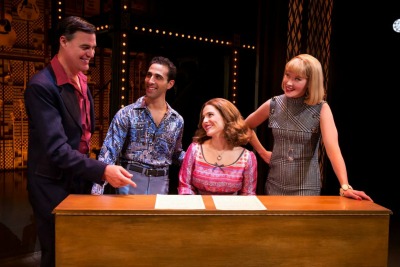 the cast takes the audience into the world of a young Carole King. Sarah Bocknel portrays Carole King, and she does an exquisite job. Not only does she sound like King when she performs, but she also takes the audience on an emotional journey with Carole. Bocknel makes Carole immediately relatable, and throughout the show the audience was enamored with her portrayal of Carole King. Bocknel opens the show strong with the song “So Far Away,” and she gives a heart wrenching rendition of the Reprise of “Will You Love Me Tomorrow.” Andrew Brewer plays Gerry Goffin, the American lyricist most know for co-writing songs with Carole King. Brewer is charming in the role, and gives an emotional performance as his character evolves during the show. Brewer and Bocknel have great chemistry onstage and they perform a very fun rendition of “Take Good Care of My Baby.” Sarah Goeke plays Cynthia Weil, an American songwriter who is good friends with Carole. Goeke gives this character charisma and her scenes with Jacob Heimer who plays Barry Mann were captivating. Heimer plays Barry Mann, an American songwriter who wrote many of his songs with Cynthia Weil. Heimer was perfectly quirky and his scenes with Goeke were both amusing and passionate. Another performance that deserves mentioning is the role of Genie Klein, Carole’s mother, played by Suzanne Grodner. Grodner has a presence onstage and adds humor to many of the scenes. Lastly, I loved all the music in the show so much that it made me want to come home and listen to more Carole King music; the number “The Locomotion” in particular is one that had members of the audience tapping their feet. The number performed by Alexis Tidwell is full of pizazz and energy, and is one that will have audience members dancing in their seats.