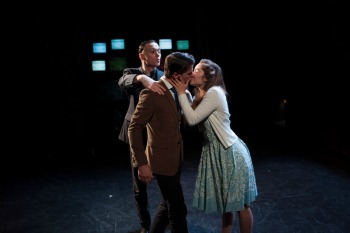 Romeo and Juliet is one of William Shakespeare’s best known plays. This particular paly was written by Shakespeare early in his career and revolves around the story of two young star-crossed lovers. This classic tale of two tragic lovers never fails to elicit emotion in me, I always want Romeo and Juliet to receive a happy ending. Personally, I was thrilled to discover this fine production at a theatre I have never attended before. I was equally as thrilled to experience an exceptional production of Romeo and Juliet at Quintessence Theatre.

One item that director, Alexander Burns, did in this production that worked well was to put a modern twist on this time-honored play. I did not feel that the modernization took away from the play, I felt it added depth, and the changes he made further piqued my interest the production, especially the Capulet’s ball. I enjoyed the modernization in regards to the costumes, lighting and dance style. This production of Romeo and Juliet is unique and sensational.   It is theatre at its best providing audiences moments full of laughter and tears. I applaud Burns and the entire cast for making Romeo and Juliet one of the finer productions of this show I have witnessed. As audiences are drawn into the story of Romeo and Juliet, they will be reminded of the power of Shakespeare.

Romeo and Juliet is an incredible production. Playing the role of Romeo is Connor Hammond. Hammond draws the audience in with his body 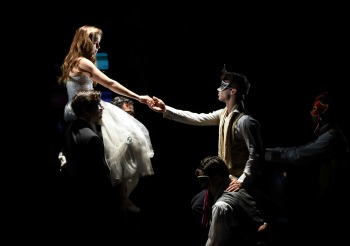 language and words, and he is eloquent when he declares his love to Juliet. Emiley Kiser thoughtfully plays Juliet. She skillfully depicts the innocence and passion of her character. Both Hammond and Kiser are suburb as Romeo and Juliet, and they epitomize the teenagers that Shakespeare intended these roles to be. Alan Brincks plays Mercutio, the witty friend of Romeo. Brincks extracts every bit of comedy from the role, and he is energetic and animated. I appreciated Brincks as Mercutio. E. Ashley Izard portrays Nurse, and she is lively and adds levity to many of her scenes. However, I found Izard’s performance especially affecting as she reacts at the unfolding tragedies throughout the play. Josh Carpenter plays Friar Laurence, the advisor to Romeo. Carpenter brings out the compassion of this part, and the scene in which he learns of Romeo’s love for Juliet he seems genuinely concerned for Romeo. Additionally, Carpenter portrays Tybalt, Juliet’s cousin who tries to protect her. The fight scene between Tybalt, Romeo, Mercutio and Benvolio (Jahzeer Terrell) is brilliantly done. Sean Close plays Paris, a suitor of Juliet, and the man her father intends for her to marry. Close makes Paris the opposite of Romeo, he is conventional and unromantic, and brings out his character’s uprightness.  Lastly, I need to mention, Anita Holland and Gregory Isaac who play the Capulets, Juliet’s parents. There is a particular scene that these fine actors shine in, and that is the scene where Juliet is told that she is to marry Paris. This scene is full of passion, anger and frustration. I applaud Holland, Isaac, Kiser and Izard for this well done scene. 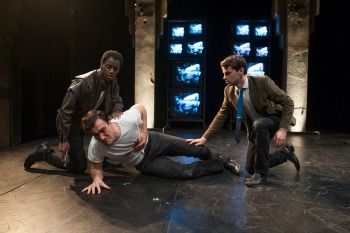 Lastly, I need to commend the production team of this show for their use of digital media, lighting, sound and choreography that brings this entire production together. David Sexton is the Lighting Designer and Steven Cahill is the Composer and Sound Designer. Alexander Burns also serves as the Set Designer. Jane Casanave designed the costumes. Ian Rose is the Fight Director and Kaki Burns in the Choreographer.

Romeo and Juliet runs at Quintessence Theatre through November 7, 2015. For more information and tickets visit their website at www.quintessencetheatre.org or call their box office at 215-987-4450.

Final Thought: Romeo and Juliet at Quintessence Theatre is an exceptional production of this show. This play is exquisitely presented and will remind audiences of the power of Shakespeare.