People’s Light Presents an Elegant Production of THE CHERRY ORCHARD 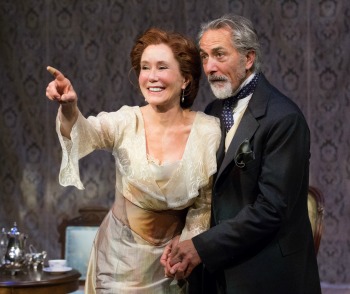 This production of The Cherry Orchard at People’s Light is an adaptation by Emily Mann that is humorous while still sticking to Chekhov’s themes. The Cherry Orchard opened at the Moscow Art Theatre in 1904. This play was the last play Anton Chekhov’s wrote; he wrote the play as he battled tuberculosis, which would claim his life a few months after the play opened in Moscow. The play tells the story of a matriarch, Ranevskaya, who returns to her family’s estate just before it is to be auctioned due to a delinquent mortgage. Ranevskaya is faced with losing her childhood home as well as the beloved cherry orchard. Ranevskaya and her brother, Gayev, are presented with options to save the estate and are urged by Lopakhin, a merchant, to divide the orchard into lots and lease the lots for homes in order to pay off their debt.  Mann’s adaptation of The Cherry Orchard, under the direction of Abigail Adams, at People’s Light covers many serious topics such as the conflict between social classes, but there is also comedy and humor within this play that makes this an enjoyable production.

Mary McDonnell superbly plays the role of the matriarch, Ranevskaya. McDonnell’s elegant performance allows the audience to feel for her 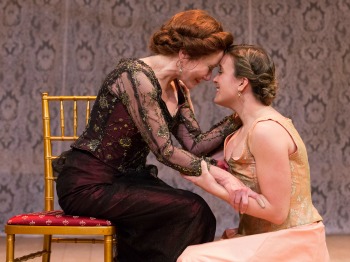 character, who is naïve about finances and is generous in nature when it comes to money. Portraying Ranevskaya’s brother, Gayev, is David Strathairn. Straithairn gives an exceptional performance as the eccentric brother, who although he direly wants to save the estate lacks the where with all and motivation to do so. Playing Ranevskaya’s two starkly different daughters are Teri Lamm as Varya and Olivia Mell as Anya. Mell gives her role an innocence and vitality as the younger daughter. Lamm shines as the older daughter who is frustrated and struggling to keep her family together. Pete Pryor plays local merchant, Lopakhin, who reminds the audience at the beginning of the play, “Remember who you are.…” Pryor gives a noteworthy performance as this character who is practical and who tries to offer advice to save the estate. The entire ensemble of The Cherry Orchard is outstanding, and they did a remarkable job of bringing this story to life.

In addition to the incredible performances and directing, I need to mention a few other aspects of the show that stood out. Samantha Bellomo choreographed this show, and the dances at the party scene are elegant and sophisticated. I was impressed last season with Bellomo’s choreography in Pride and Prejudice and the choreography in this show is equally impressive. Tony Straiges designed the incredible set. Marla J. Jurglanis designed the remarkable costumes. In addition, Dennis Parichy is the Lighting Designer and Melissa Dunphy serves as the Composer/Sound Designer/Musician.

The Cherry Orchard runs at People’s Light through March 8, 2015. For more information visit their website at www.peopleslight.org or call the box office at 610-644-3500.

Final Thought: The Cherry Orchard at People’s Light is a captivating production. It has a strong cast that all give phenomenal performances. This show is well worth a trip to Malvern for the opportunity to experience this production from its phenomenal performances to the exquisite costumes to the beautiful sets. It is an elegant evening of theatre that you will be sorry to miss.