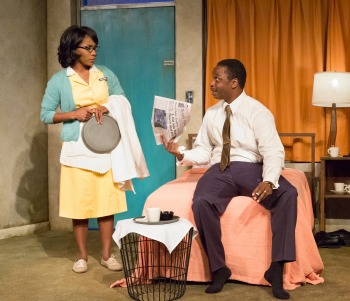 People's Light opens their 42nd season with Katori Hall's The Mountaintop directed by Steve H. Broadnax III. This moving drama is about the night before Martin Luther King Jr.'s assassination. The show takes place on April 3, 1968 at the Lorraine Motel in Memphis Tennessee. One of the things that this show does extremely well is illustrate the humanity of King, in that even though he did great things for this world, he also had his flaws. The Mountaintop at People's Light is powerful and it is a show that is brilliantly done with outstanding performances.

Playwright Katori Hall wrote The Mountaintop to be a fictional depiction of King on the eve of his assassination. In the notes by Dramaturg, Gina Pisasale, she explains that Hall's mother had regret that she did not have the opportunity to hear King speak, so this play is a way for Hall to provide her mother that chance to meet King. The play presents a conversation between King and Camae, a person who works at the motel and who delivers King’s room service order. What transpires between these two is a conversation about fears and human connection. This play provides a fictionalized account of what King was going through the night before his death. In addition, the last five minutes of this play is a very powerful scene that will leave the audience strongly affected about this idea of passing the baton, which was King's way of leaving other people to take up his cause. This is a scene that will stay with the audiences long after the show is over.

Patrese D. McClain portrays Camae, a person full of enthusiasm and personality who brings King his room service order. McClain is animated and full of energy, she adds a lot of personality and heart to this role. In addition, her banter with Bowman Wright who plays Dr. Martin Luther King Jr. is fantastic. These two have wonderful chemistry onstage, they make the show radiate with energy and sexual tension. In addition, what I loved about Wright's portrayal is that he brings out the human aspect of King. He reminds audiences that King was flawed, but that he also did great things for the civil rights movement. Both Wright and McClain give exceptional performances.

The artistic team did an exceptional job with this show, adding marvelous special effects while capturing small period appropriate details that 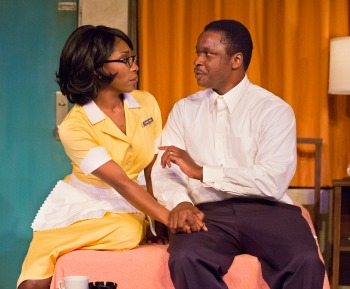 enhanced the overall experience of this show.  Tony Cisek designed the set that captured the time period and the look of the Lorraine Motel. Marla J. Jurglanis designed the incredible costumes. Joshua L. Schulman is the Lighting Designer and Justin Ellington provided the original music and Sound Design. In addition, Katherine Freer serves as the Projection Designer.

The Mountaintop runs at People's Light through October 30, 2016. For more information and tickets visit their website at peopleslight.org or call their box office at 610-644-3500.

Final Thought:  The Mountaintop at People's Light is an incredibly powerful play about the eve of Dr. Martin Luther King Jr.'s assassination. The show provides a moving experience that encompasses a stunning use of visual media and a cast that provides exceptionally passionate performances. It is a show that is powerful, and the last five minutes of the show will have audiences talking long after the show is over.