MEMPHIS at Walnut Street Theatre has Heart and Soul 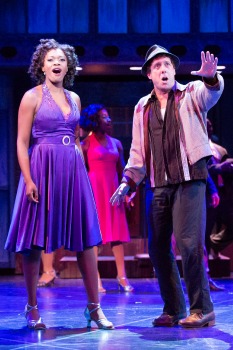 The Walnut Street Theatre’s exuberant production of Memphis is a good time. This show, which is  loosely based on real events, tells the story of Huey Calhoun, a quirky white DJ who bucks convention and racism to play “race” music for the general radio listening audience in Memphis in the 1950s. Huey is determined to popularize the music that "grabbed him by the heart and broke down all his senses." The production of Memphis at the Walnut Street Theatre is full of strong performances, incredible music and energetic choreography.

Memphis is set in the 1950s at the brink of the rock n’ roll era. The show has a book by Joe DiPetro (who also wrote the book and lyrics for I Love You, You’re Perfect, Now Change) and an infectious score by David Bryan (keyboardist for Bon Jovi.) This musical pulls from the idea of a time of change in our country, and is loosely based on Memphis DJ, Dewey Phillips, who was one of the first white DJs to play R&B on a radio station with a predominately white listening audience in the 1950s. The story of Memphis moves between underground Rhythm and Blues dance clubs and a determined white DJ who makes it his mission to play the music that “grabbed him by the heart and broke down all his senses.” The show also tackles the issues of racism and the integration of Memphis in the 1950s. It is a show that has soul, a storyline that is compelling and is full of moving high-energy music.

The production of Memphis at the Walnut Street Theatre is directed and choreographed by Richard Stafford. In the role of Huey Calhoun is Christopher Sutton. Sutton finds a balance between awkward and captivating in his performance. He begins the show as a man who is passionate about music, and follows his heart and his ears to a black dance club where he hears the sweet sounds of the music that move him. The moment he descends the stairs of this club perfectly captures the heart of this character and shows Huey‘s passion for the music and his determination to have it played on the major radio stations for all to hear. Sutton perfectly captures this idea through his physical and facial expressions, and it sets the tone of the rest of the show. Playing Felicia, a beautiful soul/blues singer that Huey falls in love with, is Kimber Sprawl. Sprawl is sensational in this role, and her voice is powerful. Her vocals 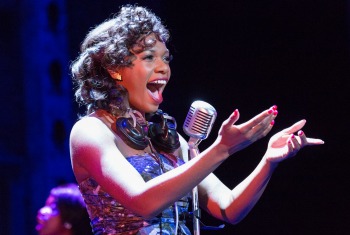 are strong throughout the show, and her number “Someday” is one of my favorites in the show. Philip Michael Baskerville plays Delray, the owner of the dance club and Felicia’s brother, who is trying to protect her from being hurt. I truly enjoyed Baskerville’s performance as not only the person who resisted having Huey in his club, but also as the protective older brother. Baskerville brings to light the different layers of his character with grace, and he skillfully reveals Delray’s story throughout the show. In addition, Baskerville’s song, “She’s My Sister,” is strong, and demonstrates that he is trying to protect his sister from harm. Mary Martello plays Mama, Huey’s mother. It is always a pleasure seeing Martello on the Walnut’s stage, and she brings strength and personality to this role. The character of Mama is struggling with the changes happening in society, and Martello skillfully portrays this character’s changing attitude through her performance. Another highlight of the show is Nichalas Parker as Bobby, a janitor at the radio station. Parker will have audiences tapping their feet, with the remarkable and energetic number, “Big Love.” Lastly, the song at the end of act one, “Say a Prayer,” left the audience with a beautiful ending to the first act. This song is incredibly performed by Travis Keith Battle who plays Gator, the bartender at the Beale Street Club who does not speak for most of the first act.