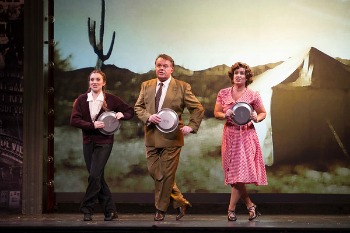 Gypsy is one of those shows that is so iconic that everyone has either seen a production of the musical or knows some of the music. Long before I saw my first production of Gypsy I knew all the words to songs such as "Everything is Coming Up Roses" and "Some People." However, the production at the Media Theatre is a reminder of why this show is so iconic, it has a great story with powerful musical numbers. In addition, Gypsy at Media Theatre has its own unique spin on the show, and a set full of vaudeville era images that transport the audience back in time to the vaudeville circuit.

The musical Gypsy is based on the memoirs of Gypsy Rose Lee, and the story revolves around her mother, Rose, and Rose’s two daughters, June and Louise. Jule Styne wrote the music for Gypsy, and Stephen Sondheim penned the lyrics. The original Broadway production opened on May 21, 1959 at The Broadway Theatre. The original production starred Ethel Merman, Jack Klugman and Sandra Church. “Gypsy” has seen several Broadway revivals starring well-recognized names such as Angela Lansbury, Tyne Daly, Linda Lavin, Bernadette Peters and Patti LuPone. Gypsy tells the story Rose, a domineering stage mother, desires to make at least one of her daughters a successful star of the stage. This musical has moments of heartbreak and moments of laughter.  “Gypsy” takes the audience on an adventure following Rose and her daughters through the hard life of show business.

Director, Jesse Cline, has assembled a cast that individualizes their roles. Krissy Fraelich leads this cast as Rose, the mother who desperately 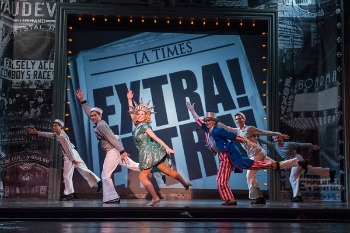 wants to have one of her children be a star. Fraelich has been seen in several other iconic roles throughout the region such as the Witch in Into the Woods and Dot/Marie in Sunday in the Park with George. She has a way to make each role she plays unique and her interpretation of Rose is no exception. Fraelich brings to light Rose’s desperation to achieve her dreams through achieving success for one of her daughters. However, Fraelich also brings a kindness to the role that shows Rose’s love for her children even though she is constantly pushing them to achieve. Fraelich's songs are all powerful, moreover her rendition of "Rose's Turn" is a stand out number that is brilliantly performed. She shines vocally and her emotion really comes through in this song. Kelly Briggs plays Herbie, her children’s manager, who also is in love with Rose. Briggs brings a warmness and understanding to this role. The chemistry in the scenes between Briggs and Anna Giordano who plays Louise is remarkable. Giordano's portrayal of Louise, the daughter who always takes second place to her sister, and who eventually becomes Gypsy Rose Lee provides a satisfying performance in act one. Audiences will be empathetic towards her tribulations with her mother and battling with being made to feel of lower value than her sister. However, in act two, when Louise is pushed to become a stripper by her mother, I had a hard time feeling her sufficient anger towards her mother. Once the character evolves into the successful stripper, Gypsy Rose Lee, I had a really hard time connecting with her, she seemed to lack a connection with the audience after this transition. That being said, I adored the scenes between Louise and her sister June. Taylor Elise Rector plays June, the daughter who Rose is convinced will be a star. 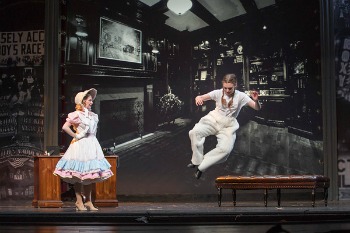 Rector gives June lots of spirit in Media’s production. The song, “If Mama Was Married” performed by Rector and Giordano is full of animation and energy, and it is a great duet between these two actors. There is one number that really stood out to me in this production and that is the song performed by Tulsa, played by Avery Sobczak, “All I Need is the Girl.” Sobczak is charming and has an incredible presence onstage. This number was particularly well done, and the elegant choreography for this scene as conceived by Dann Dunn is outstanding. One last number I need to mention is, “You Gotta Get a Gimmick,” which is entertainingly performed by Jennie Eisenhower, Hillary Parker and Karen Toto. This song had audiences cheering the night I attended the performance, and these three well deserve the applause.

Gypsy runs at The Media Theatre through November 1, 2015. For more information and tickets visit their website at www.mediatheatre.org or call the box office at 610-891-0100.

Final Thought: Gypsy at the Media Theatre transports audiences back to a time when vaudeville and the Orpheum Circuit were the entertainment of the day. It is a production that takes an iconic show and provides a bit of a twist to make it their own.