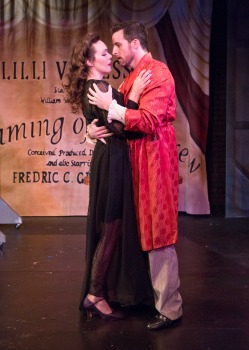 Act II Playhouse’s production of KISS ME, KATE is a show that is imbued with energy and full of delightful musical numbers. It has a sensational score by Cole Porter that will please audiences. This show, under the direction of Peter Reynolds and with the incredible choreography by Maggie Anderson, is a reminder of the timeless melodies of Porter and it has a cast that will entertain audiences. Kiss Me, Kate at Act II Playhouse shines and will have members of the audience smiling from start to finish.

The classic musical, Kiss Me, Kate, tells the story of a production of William Shakespeare’s Taming of the Shrew, and the back stage relationships and drama that occur between the actors on and off stage. The story is set in the summer of 1948 in Baltimore. Cole Porter wrote the music and lyrics for this show, and the musical on Broadway ran for more than 1,000 performances.  Sam and Bella Spewack wrote the book for this show. The original Broadway production of Kiss Me, Kate opened in December of 1948. In addition, in 1949 it won the first Tony Award presented for Best Musical.

What really works for me in this show is how the opening number, “Another Op’nin, Another Show,” sets the tone for the rest of the show through this fantastic number. It also was a reminder of how director, Peter Reynolds and the Artistic Team all worked together to make this show work in Act II’s intimate theatre. This opening number has dazzling choreography and is filled with dynamism. Jennie Eisenhower plays Lilli Vanessi the leading lady who battles, reconciles and battles again with her ex-husband, Fred Graham. Eisenhower is wonderful in this role as the diva, and capably shows a range of emotions from loving to hateful and angry. I particularly enjoyed her rendition of “I Hate Men,” which had good energy and strong vocals. Where I felt this production missed something was in regards to the chemistry between Eisenhower and Sean Thompson who plays Fred Graham. When Eisenhower sings “So in Love” in act one, one would believe that she is in love with Fred, however, seeing these two interact the emotional connection was lost for me. That being said, Thompson is strong when he plays Petruchio in the production of Taming of the Shrew. He is charming with an air of superiority. In addition, his performance in act two of “So in Love” was the most heartfelt vocal in the production. Mindy Dougherty plays Lois, the 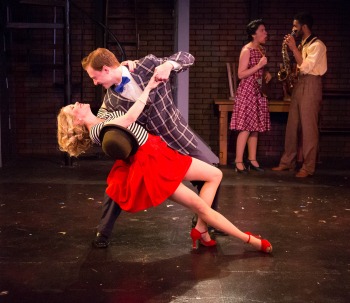 flirtatious ingénue whose heart belongs to Bill Calhoun. Dougherty is full of pizzazz in “Tom, Dick or Harry.” Zachary Chiero portrays Bill Calhoun, who is avoiding a couple of gangsters who have come to collect his gambling debts. He is a joy to watch particularly in “Bianca,” and he has good chemistry with Dougherty’s Lois. The two men who stole the show are Sonny Leo and Peter Bisgaier as the two gangsters that are at the theatre to collect Bill’s gambling debt. Their antics throughout the show are hysterical, and their performances in “Brush Up Your Shakespeare” had the audiences wishing they would return for just one more verse of this fun number. Lastly, there was one number in the show that was incredibly well done from the costumes to the choreography to its percussive rhythms, and that is “Too Darn Hot.” This number begins with a soulful vocal from Jordan Dobson, and launches into vibrant choreography performed by many talented members of the cast. 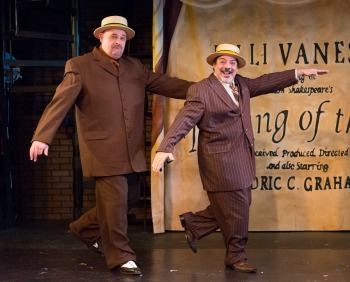 Final Thought: Kiss Me, Kate at Act II Playhouse is a show that will delight audiences with its vibrant score by Cole Porter and a cast that will make audiences smile. This production makes for a light-hearted and entertaining evening out.