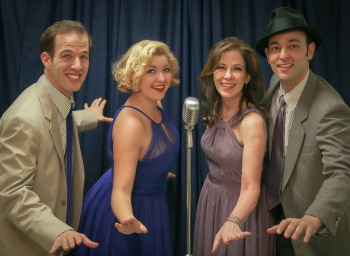 Gretna begins their 86th season this week with My Way, a show that pays tribute to Frank Sinatra. This show takes the audience on a journey with the music of Frank Sinatra, and the cast performs over fifty of Sinatra’s songs. Throughout the evening, the cast informs the audience about events in Sinatra’s life, as well as entertains with his powerful music. Gretna Theatre’s opening production, My Way, is a magnificent night of entertainment that any fan of Sinatra and his music should not miss.

Walking into the theatre, the first thing that caught my eye was the stunning set. My Way takes place in a cabaret in present day, and the set makes you feel as if you are witnessing a night of wonderful entertainment inside a cabaret. Kyle Dixon did the scenic design for this production, and he deserves applause for the stunning set. Dennis Courtney directed and choreographed this show. In addition, Louis Goldberg is the musical director.

My Way is a musical review that celebrates the music of Frank Sinatra. In the beginning of the show the actors illustrate that they wish to “evoke the spirit of Sinatra” throughout the show. In addition, they explain that Duke Ellington called Sinatra “the ultimate leader.” Throughout the show, audience members are reminded about the significance of Sinatra and the brilliance of his music. His music spanned from Big Band, television, film, Billboard and musicals.

The company for My Way is a four-person cast, and they are all an extremely talented group of actors. The singing in this show is beautiful. Deb Lyons elegantly performs “The Way You Look Tonight” and “This is All I Ask.”  Lyons lights up the stage with her strong voice.  Matthew LaBanca is entertaining to watch, and his renditions of “Fly Me to the Moon” and “The Lady is a Tramp” are outstanding. LaBanca also gracefully entertains throughout the evening with some tap numbers that should not be missed. Christie Dabreau has incredible energy and her rendition of “It was a Very Good Year” and “The Best is Yet to Come” are lovely.  Michael Popovsky sings songs such as “Makin’ Whoopee” and “I’m Gonna Live ‘til I Die.”  Popovsky captivates the audience with his powerful voice. The duet between Dabreau and Popovsky, “Love and Marriage” was charming, and one of the best duets of the show.

My Way is at the Gretna Theatre until June 23, 2013. For tickets and more information visit them online at www.gretnatheatre.com or call the box office at 717-964-3627.

Final Thought: My Way is a show not to be missed for those who are a fan of Sinatra’s music. This production is a fabulous show that celebrates the life and music of Frank Sinatra.

Kelli Curtin is editor and writer for theatresensation.com. In addition, she writes for the online sites broadwayworld.com and figlancaster.com and is a freelance writer. Kelli is excited to share her passion about theatre and the arts with her readers. Kelli can be found on twitter @theatrescribe and on Facebook/theatresensation