Experience A LIFE IN THE THEATRE at the Walnut Street Theatre 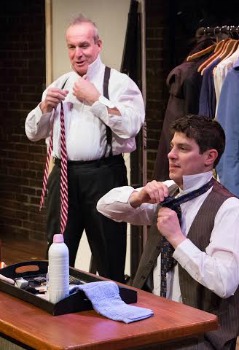 The Walnut Street Theatre continues their Independence Studio on 3 series with A Life in the Theatre. This play, written by David Mamet, is an inside look at actors’ lives during different stages in their career. This show offers a glimpse into the behind-the-scenes moments of an actor’s life and it is told through humor and heart felt dialog. A Life in the Theatre is not only a wonderfully written play, but it is also skillfully performed.

A Life in the Theatre is a play written in 1977 by David Mamet. The show is a series of vignettes about the lives of two actors, Robert, an experienced actor, and John, an unseasoned younger actor. The relationship between these two characters grows and evolves during the play. A Life in the Theatre is a show that at its heart is a love letter to the acting profession that is told through humor and sentiment.

Playing the role of Robert, a stage veteran, is Bill Van Horn. Not only is Van Horn in this show, but he directs the production as well.  Van Horn plays this role with precision as he conveys the ups and downs of an actor’s life. Davy Raphaely portrays the role of John. John is a younger actor who is full of life, and he looks to Robert for advice and sometimes for his approval. Raphaely gives a poised and energetic performance as John. Both Van Horn and Raphaely have great chemistry onstage, which is essential to making this show engaging for the audience.  In addition, both these fine actors imbued life into their characters and gave them depth. They provided the audience a glimpse into the portrayal of an actor’s psyche and their vulnerabilities, especially as demonstrated in scenes in which the characters are searching for validation. Both these fine actors and all involved with this show deserve a round of applause for bringing an emotionally stirring A Life in the Theatre to life on stage at the Walnut Street Theatre’s Independence Studio on 3.

A Life in the Theatre runs at the Walnut Street Theatre’s Independence Studio on 3 through February 1, 2015 before embarking on a National 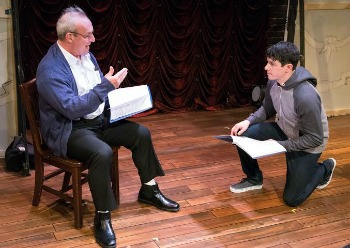 Tour. For more information and tickets visit their website at www.walnutstreettheatre.org or call their box office at 215-574-3550.

Final Thought: A Life in the Theatre is a show that provides a glimpse into the lives of two actors. This show presents the ups and downs of actors’ lives, and the play is exquisitely performed by Bill Van Horn and Davy Raphaely. It is definitely an experience that audiences, no matter what their profession, can relate to because the trials and tribulations of these characters are issues we all face in our personal and professional lives.