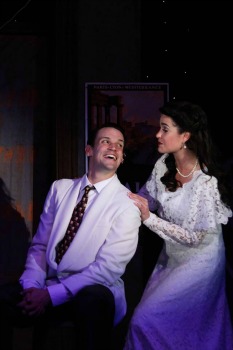 The current show onstage at Dutch Apple Dinner Theatre is It’s a Wonderful Life.  This show adapted from the holiday 1946 classic Frank Capra film, It’s a Wonderful Life, is perfect for the holiday season. The show follows the life of George Bailey from his childhood dreams through his life’s tribulations and ultimately to the circumstances leading up to his aborted suicide attempt, and the audience and George embark on a journey to see how George Bailey’s life intertwined with so many others to make a positive difference in the world. The show is complete with scenes that will remind audiences of memorable scenes from the movie as well as musical numbers. It’s a Wonderful Life is a heartwarming show that is perfect for the holiday season.

The musical version of It’s a Wonderful Life has a book and lyrics written by Sheldon Harnick, and music by Joe Raposo. The show tells a similar story to that of the classic holiday movie, albeit from a somewhat different perspective. The musical faithfully follows the life of George Baily from his childhood dreams to his midlife disappointments. Through this story Clarence, George Bailey’s Guardian Angel, reveals to him how different the world would be if he had never been born, and shows him all the lives that he has touched in his daily life. As Clarence explains to George, “Strange, isn't it? Each man's life touches so many other lives. When he isn't around he leaves an awful hole, doesn't he?” The production of It’s a Wonderful Life at Dutch Apple Dinner Theatre is a heartwarming delight.

The cast does a fantastic job bringing to life the story of It’s a Wonderful Life under the direction of Paul Bernier and choreographer Lauren Leorcher Sobon. Playing the role of George Bailey is Jake Delaney. Delaney is immensely likeable in this role. Instead of trying to imitate Jimmy Stewart who played the role in the movie, Delaney makes this role his own. There is also a tender moment between Delaney and the young actress playing Zuzu where he sings, “Precious Little.” This moment in the musical is incredibly touching. Playing the role of Mary, George’s wife, is Katherine Walker Hill. Hill has a strong stage presence and she gives Mary the warmth needed to connect with the audience. Delaney and Hill have great chemistry onstage, and their scenes together are strong. Their song, “If I Had 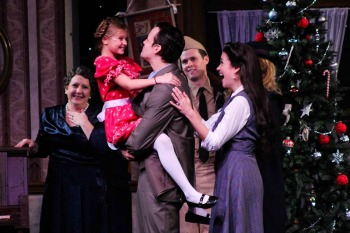 a Wish” is one of my favorite in the production. Playing George’s dad, Tom, is Luther Chakurian. Although this character is only present for a short time, he has one of the more emotional songs of the show, “One of the Lucky Ones.” This number is strong, and will tug on the heartstrings of the audience. Playing George’s mother, Milly, is Lisa Coday. Coday gives a gentleness and kindness to this character. Daniel Gene does a fine job playing, Harry, George’s younger brother who achieved the things in life that George did not have the opportunity to. Michael Weaver plays Uncle Billy, the absent-minded uncle. Weaver although comedic,  also gives an emotional depth to his character. Rounding out this cast is Connor McAndrews who plays Clarence, the Angel trying to get his wings. McAndrews is enthusiastic and energetic, and he adds levity to offset some of the more emotional moments within the production. From beginning to end the show fills the audience with holiday cheer through the spirited retelling of It’s a Wonderful Life.

It’s a Wonderful Life runs at Dutch Apple Dinner Theatre through December 23, 2014. For more information and tickets visit their website at www.dutchapple.com or call the box office at 717-898-1900.

Final Thought: It’s a Wonderful Life is heartwarming gift for the holiday season. This musical will delight audiences of all ages as they watch this holiday classic transpire on Dutch Apple’s stage.