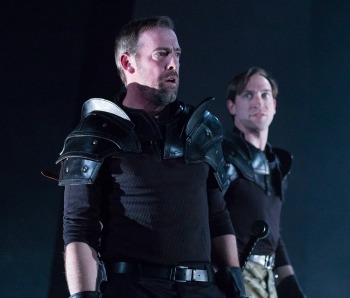 Macbeth tells the tale of Macbeth, a Scottish general, who receives a prophecy from three witches (The Three Weird Sisters) who prophesize that he will become King of Scotland. Macbeth comes to believe this prophecy, and becomes consumed with ambition, which leads Macbeth and his wife to murder King Duncan and take the throne. This murder leads to guilt and mistrust, and the unraveling of Macbeth and Lady Macbeth.

Under the direction of Alexander Burns, Macbeth at the Arden is unlike any other production of Macbeth I have seen before.  This play is a stunning production and one you would be sorry for missing. Playing the title role of Macbeth is Ian Merrill Peakes. Peakes is exceptional and captivating. His facial expressions are like a window into Macbeth’s soul as we see him evolve from his noble origins and in his bloody pursuit of the throne to his guilt-ridden madness and ultimate downfall. Judith Lightfoot Clark is seamless as 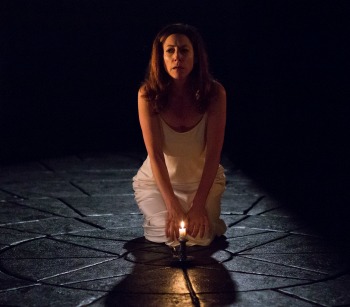 Lady Macbeth. She shows strength and determination as Macbeth’s wife who is willing to do anything to advance her husband to become king. Another highlight of the show is Ben Dibble who plays Banquo, Macbeth’s friend and general in King Duncan’s army. Dibble is the perfect counter balance to Peakes’s Macbeth. He is charismatic and has a commanding presence even in his scenes as a ghost. The Three Weird Sisters are spectacularly played by E. Ashley Izard, Aimé Donna Kelly and Mary Tuomanen, and add a sense of mysticism to the play. These three appear as forces of nature who act and dance with assurance. Christopher Patrick Mullen plays a fine King Duncan. However, he shines as the Porter with his energy and animation providing a highly entertaining rendition of this character. Mullen is excellent in this role as he provides much needed comic relief and levity.

In this production of Macbeth all elements of the show contribute to create a bold production. Brian Sidney Bembrige created the dramatic stage that has the appearance of stonework.  The lighting design by Solomon Weisbard accompanied by the sound design by James Sugg create an ominous atmosphere, which adds to the tension in Macbeth.  Additionally, Rosemarie E. McKelvey designed the beautiful costumes.  Fight director Paul Dennhardt choreographed the fierce battle scenes. 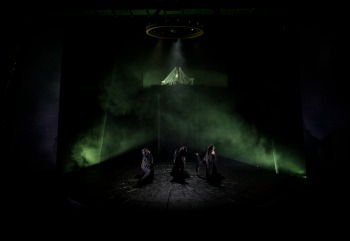 Do not miss this exciting production of Macbeth at the Arden Theatre. The show runs through April 19, 2015. For more information and tickets visit their website at www.ardentheatre.org or call the box office at 215-922-1122.

Final Thought: The Arden’s production of Macbeth is a show that delivers an exceptional evening of theatre.  All elements of this show blend seamlessly together to create an outstanding production of this renowned tale.