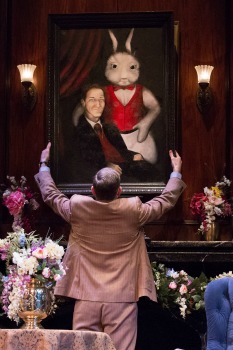 After the snow we experienced over last weekend, there is nothing better to lift the spirits and warm the soul then a delightful and humorous play. Harvey at the Walnut Street Theatre does just that. This play will endear the audience to the characters of the show, and will provide for an evening full of laughter. This is one of the strongest productions of this play that I have seen, and it is one I would highly recommend. Harvey at the Walnut Street Theatre is an enjoyable production with a strong cast that will delight audience of all ages.

Playwright Mary Cole Chase wrote Harvey in order to raise people's spirits during World War II, the story behind its creation is that Chase had a neighbor who lost her son in the War, and she wrote the play to see her neighbor laugh again. The play premiered on Broadway in 1944. It also received the Pulitzer Prize for Drama in 1945. Additional dialogue for Harvey was conceived by Ken Ludwig. Harvey is most famously known due to the film adaption in 1950, which starred Jimmy Stewart. Harvey is about a man, Elwood P. Dowd, who has a friend, Harvey, who happens to be a six foot tall rabbit that no one else can see. Elwood insists on introducing Harvey to everyone in town and that has made climbing the social ladder difficult for Elwood's sister, Veta, and her daughter, Myrtle Mae. Veta makes a decision to have her brother committed to a sanitarium to spare their family further embarrassment. Under the direction of Bob Carlton, Harvey is an enchanting production that will keep audiences absorbed in the light-hearted plot of the play.

Playing the role of Elwood P. Dowd is Ben Dibble, and he brings charm to this lovable character. What I adored about Dibble's performance is how he immediately endears himself to the audience by giving a strong and heartwarming performance. Dibble gives this character charisma and shows his understanding that it is wiser to be kind than smart. Mary Martello plays Elwood's sister, Veta. Martello provides a graceful performance as a society matron who is troubled by the antics of her brother. In addition, Martello is hysterical, and she successfully manages the difficult task of keeping Veta likable and authentic throughout the show. Ellie Mooney plays Veta's daughter, Myrtle Mae, who desperately wants to be accepted in society and meet someone. Mooney gives a flawless performance as this character who is part conniving and part innocent. Mooney has great comedic timing, and her scenes with Dan Olmstead are top notch. Olmsted gives a stellar performance as Duane Wilson, an attendant at the local sanitarium, who seems to spend most of his time chasing after runaway patients. Greg Wood portrays Dr. Chumley, the head of the sanitarium. Wood is always a joy to watch onstage, and this role is no exception. As Chumley, Wood changes from a well-grounded analytical doctor to a frantic man who is unsure of who or what he is seeing. Susan

Riley Stevens is endearing as Betty Chumley, Dr. Chumley’s wife. Her scenes with Wood are rigid, as they should be, and her demeanor softens at the kindness of Elwood. Lauren Sowa as Nurse Kelly and Ian Merrill Peakes as Dr. Sanderson handle the love/hate relationship between these two characters with refinement. Sowa and Peakes steal the scenes they are in with their banter. H. Michael Walls plays Judge Omar Gaffney, and gives an intense performance as the lawyer for the Dowd family. Rounding out this cast is Fran Prisco who gives a fine performance as EJ Lofgren, the taxi driver who provides a layman’s point of view and also transportation for the Dowd faimily.

In addition to this first rate cast, I need to mention the exquisite set designed by Robert Koharchik. The set initially provides the sense of an elegant Victorian mansion and later transforms into the interior of a medical facility, and it is one of the more detailed sets I have seen at the Walnut. The costumes for the production designed by Mark Mariani, reflect the 1940s and they are beautiful. The Lighting Designer is Stuart Duke and the Sound Designer is Elizabeth Atkinson.

Final Thought: Harvey at the Walnut Street Theatre is a light-hearted and enjoyable production. It has an incredible cast and exquisite sets, and it is a show sure to delight audiences of all ages. This is one show and cast that you do not want to miss this season.