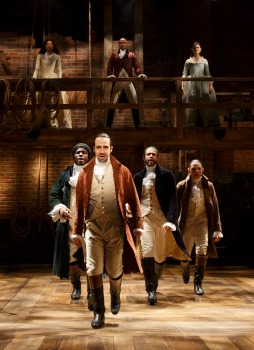 HAMILTON is produced on Broadway by Jeffrey Seller, Sander Jacobs, Jill Furman and The Public Theater. Tickets for the Broadway engagement will go on sale at 10 a.m. on Sunday, March 8 via Ticketmaster at www.ticketmaster.com or 800-745-3000.

“Hamilton has burst on the world in a blaze that has amazed and delighted all of us at The Public. We have never experienced such ticket demand, or such wild enthusiasm from our audiences,” said Public Theater Artistic Director Oskar Eustis. “Lin-Manuel Miranda’s retelling of our nation’s founding tells the story of a country that truly belongs to all of us. We are honored to partner with our friend Jeffrey Seller, along with Sander Jacobs and Jill Furman, to bring this miraculous show to the broadest possible audience.”

Inspired by the book Alexander Hamilton by Ron Chernow, with book, music, and lyrics by Lin-Manuel Miranda and directed by Thomas Kail, HAMILTON will run through May 3 at The Public, following three extensions. The Richard Rodgers Theatre is, indeed, Miranda's Broadway home: his first Broadway musical, IN THE HEIGHTS – winner of four 2008 Tony Awards including Best Musical – enjoyed a three-year run there.

From the creative team behind the In The Heights comes HAMILTON, a new musical about the scrappy young immigrant who forever changed 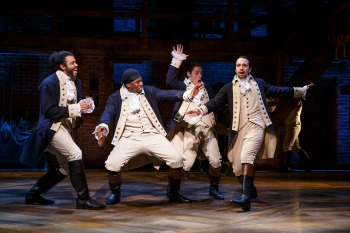 America: Alexander Hamilton. Tony and Grammy Award winner Lin-Manuel Miranda wields his pen and takes the stage as the unlikely founding father determined to make his mark on a new nation as hungry and ambitious as he. From bastard orphan to Washington's right hand man, rebel to war hero, loving husband caught in the country's first sex scandal to Treasury head who made an untrusting world believe in the American economy, HAMILTON is an exploration of a political mastermind. George Washington, Thomas Jefferson, Eliza Hamilton, and lifelong Hamilton friend and foe, Aaron Burr, all attend this revolutionary tale of America’s fiery past told through the sounds of the ever-changing nation we’ve become. Tony Award nominee Thomas Kail directs and Tony Award winner Andy Blankenbuehler choreographs this new musical about taking your shot, speaking your mind, and turning the world upside down. 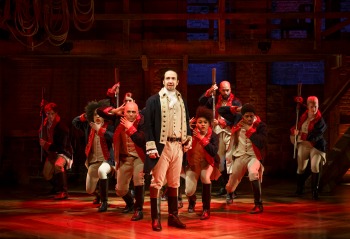 LIN-MANUEL MIRANDA (Book, Music, and Lyrics/Alexander Hamilton) is the Tony and Grammy award-winning composer-lyricist-star of Broadway's In the Heights. In the Heights received four 2008 Tony Awards (including Best Musical, Best Orchestrations, Best Choreography), with Miranda receiving a Tony Award for Best Score, as well as a nomination for Best Leading Actor in a Musical. In the Heights was also recognized as a Finalist for the 2009 Pulitzer Prize in Drama. Miranda is the co-composer (with Tom Kitt), and co-lyricist (with Amanda Green) of Broadway’s Bring it On: The Musical (2013 Tony nom., Best Musical, 2013 Drama Desk nom., Best Lyrics in a Musical). Miranda contributed new songs to the revival of Stephen Schwartz' Working and provided Spanish translations for the 2009 Broadway revival of West Side Story. Miranda, along with Kitt, won the 2014 Creative Arts Emmy for Best Original Music and Lyrics for their work on the 67th Annual Tony Awards. As an actor, Miranda appeared in the City Center Encores! productions of Merrily We Roll Along (Charley Kringas), and tick, tick… BOOM! (Jonathan). He is a co-founder and member of Freestyle Love Supreme, an improvisational hip-hop group that will launch a self-titled television series in October 2014 on Pivot TV. Additional TV and film credits include “The Electric Company,” “Sesame Street,” “The Sopranos,” “House,” “Modern Family,” “Do No Harm,” “Smash,” “How I Met Your Mother,” The Sex and the City Movie, The Odd Life of Timothy Green, and 200 Cartas.

THOMAS KAIL (Director). His Broadway credits include In the Heights (Tony nomination for Best Director); and two new plays, Lombardi and Magic/Bird. His Off-Broadway credits include In the Heights (Callaway Award, Drama Desk nom., Outer Critics nom.); at New York City Center Randy Newman’s Faust and The Wiz; Lincoln Center Theater’s Broke-ology and When I Come to Die; The Flea Theater’s Family Furniture (Drama Desk Nom.); and Second Stage Uptown’s The Tutors. Other credits include Williamstown Theater Festival’s Broke-ology; Paper Mill Playhouse’s Once on this Island; and the National Tour of In the Heights.   He is the co-creator and director of the hip-hop improv group Freestyle Love Supreme, which played the Edinburgh Fringe Festival, US Comedy Arts Festival, Montreal Comedy Festival and Melbourne Comedy Festival.  He served as the Creative Director of the 2012, 2013 & 2014 Webby Awards. For television he  directed episodes of “2 Broke Girls”; “Oprah Winfrey's 2010 Primetime Oscar Special” for ABC; the pilot episode of “Storymakers” for AMC; and he served as Co-Music Director and consulting producer on first season of PBS show “The Electric Company”. He is the Executive Producer and Co-Creator of  new TV Series “Freestyle Love Supreme” for Pivot; and he is the recipient of the Martin E. Segal Award from Lincoln Center and is a graduate of Wesleyan University, CT.

JEFFREY SELLER is the winner of three Tony Awards for Best Musical:  Rent (1996), Avenue Q (2004) and In The Heights (2008).  Additional productions include De La Guarda, Andrew Lippa's The Wild Party, La Boheme, the 2009 revival of West Side Story, and this season's The Last Ship.  As director his credits include  Fly (2013) at Dallas Theater Center.  He is a graduate of the University of Michigan.

SANDER JACOBS has been represented on Broadway with the Tony Award-winning Best Musical In The Heights and the Tony Award-nominated West Side Story revival.  Jacobs has served as a co-producer and/or investor for numerous Broadway, national and international productions, with a selection of theatre's most celebrated and critically-acclaimed musicals including Les Miserables, The Phantom of the Opera, Follies and The Last Ship.

JILL FURMAN received the 2008 Tony Award for Best Musical for In The Heights. Other Broadway credits include Rodgers + Hammerstein's Cinderella, The Heiress, Seminar, West Side Story, The Drowsy Chaperone, Sly Fox and Fortune’s Fool. Off-Broadway her credits include On The Line and Adult Entertainment.  Furman executive produced the Pivot television series “Freestyle Love Supreme,” starring the hip-hop improv group of the same name, and also produces the live version of the show.  In 2011, Furman received the Robert Whitehead Award for Outstanding Achievement in Commercial Theatre Producing. She is a member of the National Board of Review of Motion Pictures.

ABOUT THE PUBLIC THEATER:

Under the leadership of Artistic Director Oskar Eustis and Executive Director Patrick Willingham, The Public Theater is the only theater in New York that produces Shakespeare, the classics, musicals, contemporary and experimental pieces in equal measure. The Public continues the work of its visionary founder, Joe Papp, by acting as an advocate for the theater as an essential cultural force, and leading and framing dialogue on some of the most important issues of our day.  Creating theater for one of the largest and most diverse audience bases in New York City for nearly 60 years, today the Company engages audiences in a variety of venues—including its landmark downtown home at Astor Place, which houses five theaters and Joe’s Pub; the Delacorte Theater in Central Park, home to its beloved, free Shakespeare in the Park; and the Mobile Unit, which tours Shakespearean productions for underserved audiences throughout New York City’s five boroughs. The Public’s wide range of programming includes free Shakespeare in the Park, the bedrock of the Company’s dedication to making theater accessible to all; Public Works, a new initiative that is designed to cultivate new connections and new models of engagement with artists, audiences and the community each year; new and experimental stagings at The Public at Astor Place, including Public Lab; and a range of artist and audience development initiatives including its Public Forum series, which brings together theater artists and professionals from a variety of disciplines for discussions that shed light on social issues explored in Public productions.  The Public Theater is located on property owned by the City of New York and receives annual support from the New York City Department of Cultural Affairs; and in October 2012 the landmark building downtown at Astor Place was revitalized to physically manifest the Company’s core mission of sparking new dialogues and increasing accessibility for artists and audiences, by dramatically opening up the building to the street and community, and transforming the lobby into a public piazza for artists, students, and audiences. Key elements of the revitalization an expanded and refurbished lobby; the addition of a mezzanine level with a new restaurant lounge, The Library, designed by the Rockwell Group. www.publictheater.org.

The LuEsther T. Mertz Charitable Trust provides leadership support for The Public Theater’s year-round activities; Bank of America, Proud Season Sponsor of Shakespeare in the Park; The Harold & Mimi Steinberg New Play Development Fund at The Public Theater Supports the Creation and Development of New Plays; The Philip and Janice Levin Foundation - Lead Supporter of The Public’s Access and Engagement Programming; The Time Warner Foundation, Founding Sponsor of The Emerging Writers Group; Delta Air Lines, Official Airline of The Public Theater; New York Magazine is the official print sponsor of The Public Theater’s 2014-2015 downtown season; Public support is provided by the New York City Department of Cultural Affairs; the New York State Council on the Arts, a state agency; and the National Endowment for the Arts, an independent federal agency.

HAMILTON began performances on Tuesday, January 20 in The Public’s Newman Theater and was extended three times through Sunday, May 3. Tickets for the Broadway engagement that will begin performances on July 13 at the Richard Rodgers Theatre will go on sale at 10 a.m. on Sunday, March 8 at via Ticketmaster at www.ticketmaster.com or 800-745-3000.

HAMILTON is sold out at The Public Theater but cancellations may become available so check the box office at (212) 967-7555 or www.publictheater.org for last minute availability. A limited number of $20 tickets, subject to availability, will be distributed via a lottery in the lobby of The Public Theater.  These tickets are $20, cash only, with a limit of two tickets per person.  TodayTix and The Public continue to offer “Hamilton for a Hamilton” ($10) where a pair of tickets will be available for every performance for $10 per ticket. The lottery will begin each day at midnight for the performance that same day, and winners will be notified three to four hours before show time. Winners will make the payment in the TodayTix app and collect the tickets at the box office.

The Library at The Public is open nightly for food and drinks, beginning at 5:30 p.m., and Joe’s Pub at The Public continues to offer some of the best music in the city. For more information, visit www.publictheater.org.