Behind the Scenes: Brandon O'Rourke Talks about Peter and the Starcatcher at Walnut Street Theatre 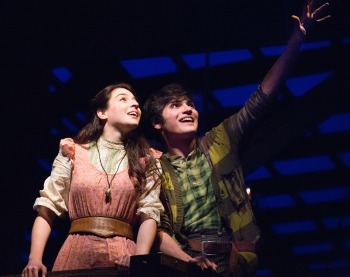 Peter and the Starcatcher, a prequel to J.M. Barrie’s treasured Peter Pan series is currently onstage at the Walnut Street Theatre. This play uses imaginative storytelling to tell the story of an orphan who eventually becomes “The Boy Who Would Not Grow Up,” Peter Pan.  I had the opportunity to speak with Brandon O’Rourke who plays Peter in the production. He spoke with me about why audiences should come out and see the show, what it is like to be part of this high-energy play and why live theatre was important to him while growing up.

Kelli Curtin: For people unfamiliar with the play, could you tell me a little about the show?

Brandon O’Rourke: Basically, Peter and the Starcatcher is about how Peter became Peter Pan and how Stache became Captain Hook, and the development of their relationship. It answers all the questions one might have when they watch or read the story of Peter Pan.

I have always loved Peter Pan. I saw the musical version of the story with Cathy Rigby when I was really little, and I remember watching it and thinking that I want to be Peter Pan. As a kid it is a really cool story because I was mesmerized by the idea of not having to grow up. This performance is something that has stuck with me and being able to do this now allows me to reflect on all that.

Kelli: What can audiences expect?

Brandon: People can expect to understand exactly who Peter Pan is. They can find out where Neverland came from, and all the questions people have about the story of Peter Pan will be answered. They can also expect a night of pure laughter and wonderment, this play takes the audience on a journey. In addition, there is a whole lot of stagecraft in this production, which is awesome to watch. The show is like a playground for adults, and it is just fun to watch and go on this journey with the cast as they tell the back story of Peter Pan.

Kelli:  Why should audiences come out and see this play?

Brandon:  It is very different from any other normal piece of theatre. This is not a stereotypical piece of writing. The stagecraft is something you do not see every day. Also, in this show audiences get to see this mass of amazing performances by amazing actors in Philadelphia. They all come together and create something truly brilliant onstage. It is a cool thing to watch and be a part of because there are so many great minds. This cast has a ton of energy and it builds and keeps getting stronger throughout the show, audiences can feel that and enjoy this high-energy show.  As much as this show is fun to watch, there is a really amazing story stitched in that will capture the audiences’ attention and imagination.

Kelli: Could you tell me a little about your character, Boy/Peter?

Brandon: Peter and Molly are the only ones that the audience can truly relate to, everyone else around them are crazy, wacky and funny. The center of this show focuses on the relationship between Peter and Molly. Peter is very straightforward, he has very little laughs in the show, but he is an emotional character. He is the one that audiences relate to. Peter is complex, he has many layers that make up who he is, and he is someone looking for a companion.  He is looking for a purpose in life, and that aspect of this character is something everyone can relate to.

Kelli: In Starcatcher, you play the boy who eventually becomes Peter Pan. Are there any similarities between you and your character? Or major differences? 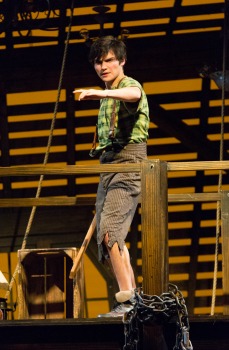 Brandon: The thing that sticks in my mind that I can relate to with Peter is first, I have never really wanted to grow up, I hated the concept of having to become an adult. To be able to be Peter for two and half hours gives me a chance to step away from who I am and embody this character who will never grow up. I’m an only child, and our director, Bill Van Horn, and I would discuss how on holidays after everyone goes home it would be kind of lonely. Bill is also an only child. The loneliness I feel as an only child is an emotion I put towards this character because I think this loneliness is something Peter feels most of the time. Peter does not really have anything to connect to, I really feel Peter feels this isolation and it is similar to what I felt growing up as on only child on holidays.

One of the biggest differences is that Peter deals with stress and unhappiness by becoming a hermit and distancing himself. Personally, I employ humor and I try to make serious situations fun.

Kelli: Starcatcher is a fun-filled and high energy show. What was it like to get used to the high energy and physicality of the show?

Brandon: It is one of the more physical shows I have been a part of. I have never been a person to sit on a couch and not do anything. I always have to be doing something, my mind is constantly running. I took up running, surfing, sailing, etc. I would call myself a very active person, and thank goodness for that because this show is crazy and we have to run all over the place. It is extremely rough on my body, and this show reminds me you really have to take care of yourself to be part of a high energy production like this.

Brandon: My family has long been involved in theatre. I have always enjoyed observing actors because they are so interesting to watch. One of 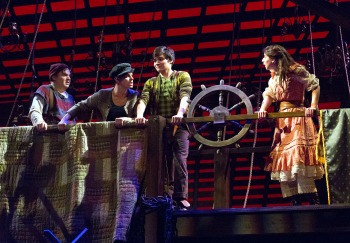 my favorite actors to watch is Mark Rylance, he is just brilliant. To be an actor is an incredibly hard task because you have to embody another human being. It is awesome to be someone else every day for a few hours, but it also difficult. The idea of being another person is where I began to form my interest in performing. In addition, watching great actors such as Rylance also peaked my interest. I saw him in plays such as Jerusalem, La Bête, Twelfth Night and Richard III. I have always loved Shakespeare, but having a chance to see Rylance make Shakespeare cool and relevant to today’s audiences was mind-blowing for me. These shows made me want to be in theatre because his performances taught me that theatre is special and that it can change lives.

Kelli: Do you have a favorite production you have been a part of? Is there a role that you would consider your “dream” role?

Brandon: I would have to say that Peter and the Starcatcher is my favorite. It has taught me a lot, it has taught me things I could never learn in a classroom. I have multiple dream roles. Right now my top dream role is Christopher Boone from The Curious Incident of the Dog in the Night-Time. I feel like it is such an important piece. The boy, Christopher, has autism, and the actor who plays this character has to play it smart and has to truly do their homework in order to play this role correctly. Doing research as an actor is such an important aspect to this job, because in theatre you have to make it real and have to make it accurate. You have to make it believable to the audience because it is crucial to put yourself into that world of the role you are playing.

Brandon: There is nothing like it. Without live theatre you have movies and television. There is not the same magic and wow factor in television and movies that there is in live theatre. Live theatre has pizazz and energy that affects audiences. On a larger level it is important for kids. Personally, I have never been “normal,” I never fit in. However, the one place where I felt like I belonged was in a theatre. Kids really need an outlet in a place where they feel they belong, and theatre was that place for me. If theatre was not there for me I do not think I would be the same person I am today. The Arts in general are such a great outlet for kids, and that is why I think theatre is so important.

Looking forward to seeing show on May 1