Behind the Scenes: A Conversation with Members of Two Ring Circus about Fulton Theatre’s ANNIE GET YOUR GUN 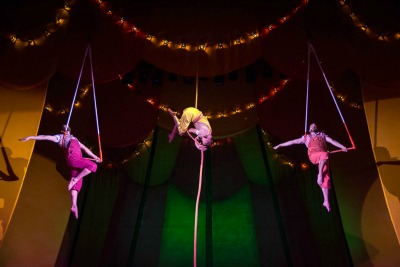 In 2015 the Fulton Theatre did an outstanding production of The Wizard of Oz, and part of the reason that show still stands out in my mind is due to the addition of Circus Arts by 2 Ring Circus. Currently, 2 Ring Circus is back at the Fulton Theatre for the production of Annie Get Your Gun, and they provide a unique element to this show that is entertaining and invigorating. Anytime am aware that 2 Ring Circus will be involved in a show at the Fulton, I always have an expectation that the show will be unlike any production I have ever seen, and they have a special ability to turn a classic musical into a new experience that will have people talking.

I had the privilege of speaking with two members of Two Ring Circus, Joshua Dean and Ben Franklin. They spoke with me about what audiences can expect from the Fulton’s production of Annie Get Your Gun as well as what the rehearsal process is like for them and the importance of live theatre.

Kelli Curtin: Could you tell me a little about the Fulton Theatre’s Production of Annie Get Your Gun? Why should audiences come out and see this show?

Ben Franklin: It is an absolute classic, but it is a classic that has all the bells and whistles of a contemporary show thrown in this classic show. This show has an Irving Berlin score, he is the most prolific and popular songwriter in American history. Berlin has the largest cannon and as far as I know he is the most published especially because of his Tin Pan Alley days. Annie Get Your Gun is fun and it is upbeat. In this production 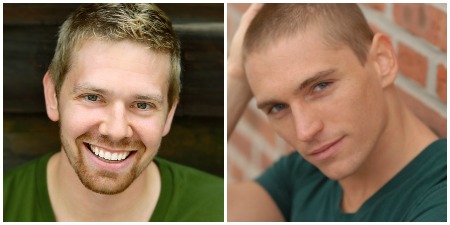 at the Fulton Theatre there are people flying in the air, the costumes are bright and colorful and there are many songs people will recognize. This really is a feel good show.

Joshua Dean: One of the fun things about Annie Get Your Gun is this adaptation is different than the original adaptation. It is a bit different than the show was when Ethel Merman did it. This production has a little more spunk and a little more of a play within a play. This particular production of Annie Get Your Gun at the Fulton is different than the original. What Marc [Robin] is doing on top of what people would expect from the show is implementing a full circus. From the time people walk into the Fulton we are out in the lobby entertaining. While people are being seated we are onstage doing a preshow, audiences will see a lot of additional performing even before the show begins. The entire theatre is transformed into the inside of a big top. It will be like members of the audience are entering a midway when they come in and there are games to play, a strong-arm machine, and there are hot dogs and popcorn.

Ben: When audiences come to Annie Get Your Gun it is more than just a show, it is a full immersive experience. Basically, people are coming to see a show, and they get to experience the circus as well.

Joshua: I think one of the fun things is that normally there are no circus tricks done within Annie Get Your Gun normally. Most times it is done with “theatre magic.” All the shooting or knife throwing is done usually using theatre magic, so it is an illusion, and not really happening. What Marc has done by bringing us in is that with Marc’s ideas we are developing the idea of the circus into the show even further. For example we are doing a “Spanish web,” which is a traditional circus act and that is being done by two of the principal actors. We have Annie Oakley flying in the air, spinning quite fast and blindfolded and shooting balloons. In addition, Curt Dale [Clark, who plays Frank Butler] makes his entrance twenty feet in the air. Part of our role is helping to facilitate the circus arts part of the show. We actually only go in the air once. We are supplying the equipment and it is Marc’s ideas. Our job is to converse with Marc and make his ideas happen. For example, we try to figure out what works best. So, we figure out the best way of doing the circus arts in the show, what the actor feels comfortable with and help train them, as well as finding what is safe and what is best for timing.

One of the actors, Natalie [Powers], who is playing Winnie is one of my students. I was on the faculty at Pace University, and she was one of my students there.  Natalie had done aerial work with me before being cast in this role at the Fulton. We continued training with her before we even arrived in Lancaster. In addition, all of us who are part of Two Ring Circus, myself and Ben as well as Kenneth Ziegler, we all take part in certain elements to really make this show feel like a Circus. Ben and Ken will be on trapezes, I will be on a rope, we are doing some trick lassoing, duo acrobatics and Ken walks on a tight wire at one point.

Ben: This show really is a little bit of everything. There are some classic Circus bits. We really are aiming to keep people in the world of a Circus. 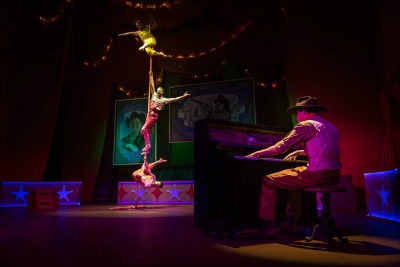 To talk a little about the history of the Circus, as is depicted in Annie Get Your Gun, this is where the origins of American Circus came from, from horse shows. Buffalo Bill’s show was primarily a horse and shooting show. He wanted to bring a version of the Wild West to people throughout America. It is impossible to completely recreate the elements especially since it involved people riding horses. So, what we do is take the thoughts of what made up the show and take the other parts that are practical to do on the stage like lassoing to fulfill a realistic interpretation of Buffalo Bill’s Wild West Show.

Kelli: What is the rehearsal process like for a show like this? Could you give me an ideal of what a typical day looks like preparing for the show?

Joshua: The rehearsal process for us starts way before we get here. For example, we were training Natalie a month before we arrived in Lancaster. She would meet us at out Circus School in New York City. I would meet with her to teach and refine her skills. Then once we arrive in Lancaster we have the hours we work that are allotted through actor’s equity, and on top of that through the business side of 2 Ring Circus we have to go to the shop and work on our circus skills and keep that training up to par. What a typical day looks like is we work in the shop to work on our skills and then we will rehearse into the afternoon or evening and then we go home and get some sleep. The next day we wake up and do the same thing again, that is our typical schedule.

Kelli: Could you explain a little bit about what you mean when you refer to “2 Ring Training?”

Joshua: It is our circus training. So we will go and work on the trapezes, work on our conditioning, work on handstands, or work on the choreography from the show. Basically, it is anything we are doing circus related because we are not going to be doing physical circus training in the rehearsal room because of rigging or time.

Ben: If you do not practice the circus training it goes away very quickly. So, we really need to keep up at our training.

Joshua: Once we get to the show’s opening, I usually arrive about two hours before curtain to warm up. It takes time to keep our bodies in check, and it is really important to warm up. We just can’t arrive right before the show and walk onstage, preparing by warming up is necessary.

Kelli: Could you explain to me a little about what 2 Ring Circus is about?

Ben: 2 Ring Circus specifically is a theatrical circus company. Originally we started by creating our own shows and produced our own work. All of us that are part of 2 Ring Circus come from a musical theatre and dance background, and we had a career in theatre before we started 2 Ring Circus. This has led to people we worked with in the past reaching out to us and asking us to add elements of circus arts into their show, as well as using our musical theatre and dancing skills. We need people who can create the circus element and execute it and also be an actor/singer/dancer onstage. Basically, our focus now has become theatrical collaborations with top theatres around the country. We are hired for a particular show to be on the artistic team and to create a circus elements and to be in the shows as well.

Joshua: The circus world has become so popular that performers now not only have to be triple threats with acting/singing/dancing, but they have to be quadruple threats with the addition of circus arts or have five threats, like in Annie Get Your Gun, where we also play instruments. This is not the first or last time we will need to have the skills to take on all five elements in one show.

Ben: I would also say on the other side, not just the creative side, the audiences are a group of people who do not know each other and assemble in a room and spend three hours together. The people in the theatre are collectively feeling and experiencing the same story. As the story onstage unfolds, everyone in the room feels the emotions of the story.

Live theatre is also a way to hold a mirror up to civilization. Live theatre challenges, inspires and draws attention to truth and honesty. If a person is a good actor they are coming from a truthful and honest place. As an actor we are creating from an honest place and we make audiences feel that honesty and emotion come through in our performances. As an actor we have the chance to illuminate minds and hearts. We can spark a new thought or a new path, as a performer we hope to inspire people in the audience.

Joshua: Live theatre unites people and makes it okay that you may think differently than the person beside you. We all can come together and draw different conclusions, and all conclusions are right. We do not get upset with each other because someone drew a different conclusion from the story or someone felt different emotions during the show. It is a way our differences are accepted in an environment that is not hostile. Live theatre is a way to bring a community together, despite their differences, and enjoy the Arts.

Joshua Dean and Ben Franklin, two member of Two Ring Circus, can be seen in Annie Get Your Gun at the Fulton Theatre through February 19, 2017. For more information and tickets please visit their website at www.thefulton.org or call the box office at 717-397-7425.