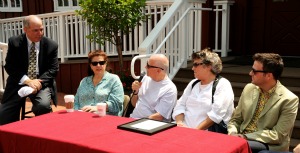 In a press conference on June 11, 2013 Jed Bernstein, Producing Director of the Bucks County Playhouse, declared Terrence McNally as “America’s greatest playwright.” He added how thrilled he is to have McNally’s new play, under the direction of Sheryl Kaller, and a star-studded cast. The cast for Mothers and Sons stars Tyne Daly, and includes Manoel Felciano, Bobby Steggert, and Grayson Taylor. Every person involved in this production shows great enthusiasm for being involved in this world-premiere play of Mr. McNally’s.

Mr. McNally explains that the inspiration for this play came from an old screenplay of his, Andre’s Mother. He further illustrates, “This play takes place twenty-five years later. Mothers and Sons does not refer to Andre’s Mother and there is only one similar character in the show. I wanted to write a play on how AIDS affects everyone in all strains of society. The play wrote itself, and I was inspired to write the play and have Tyne, Bobby and Manoel perform in the show.  I have a group of remarkable actors.” McNally also is thrilled to have his play done at the Bucks County Playhouse because “In the last ten years workshops on plays are done more frequently as theatre expenses have soared. The testing is done in an empty room and by the time everyone involved adds in changes the play is no longer what the playwright originally intended. Mothers and Sons is the play I wanted to do, and I am excited for the opportunity to have it performs on the stage at Bucks County Playhouse.”

Tyne Daly recognizes the importance of Mothers and Sons and hopes it encourages a dialogue. She explains, “In today’s society, theatre is a necessary profession. Theatre tells stories, and in the theatre we are reminded of great stories. Theatre encourages a dialogue among people that is stimulating.” Daly describes her character, Katharine, as “living in the past. She is uncomfortable in her own skin and she is possibly suicidal. There is something she needs.” 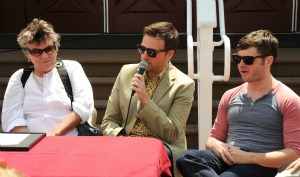 Bobby Steggert plays the character of Will in this play. Steggert describes his character as, “a modern gay man where being a husband to a man and having children is a viable option. My character represents the progress that has been made in society. My character is strong willed, steadfast in point of view and I admire that about him.” According to Steggert, this play is important because it is about relationships and families. He states, “Twenty years ago a play like this would be classified as a ‘gay drama.’ Now a play that addresses issues faced by gay people is mainstream. The characters in this play are interesting because they are people and not because of their sexuality.” Steggert is hopeful that people that see this play will “broaden their definition of family after seeing Mothers and Sons through observing the family on stage.”

Also published on the Broadway World Philadelphia website on June 13, 2013.