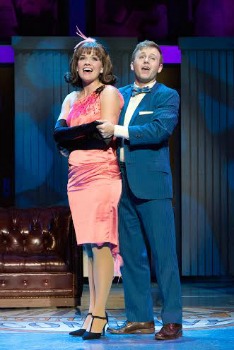 The Walnut Street Theatre closes their 2013/14 season with How to Succeed without Really Trying. This musical is hilarious, charming and entertaining. The musical tells the story of an ambitious young man, J. Pierrepont Finch, who with the help of a book, How to Succeed in Business without Really Trying, sets out to make his dreams of becoming a powerful businessman come true. In Finch’s journey to reach the top of the World Wide Wicket corporate ladder, he meets many colorful characters that attempt to impede or assist with his progress. The result of the Walnut Street Theatre’s production is a show that is amusing, as well as satirical, and it provides for a well-spent evening out.

How to Succeed in Business without Really Trying, a two-act Frank Loesser musical, is based on the 1952 book of the same name. Abe Burrows, Jack Weinstock, and Willie Gilbert wrote the book for the musical. The original Broadway production opened in 1961, and won seven Tony awards, as well as the 1962 Pulitzer Prize for Drama. In addition, a film based on the musical opened in 1967. The actors from the Broadway show, Robert Morse and Rudy Valee played respectively J.Pierrepont Finch and his boss, J.B. Biggley, and they also reprised their role in the film.

Under the direction of Casey Hushion, the entire cast shines in this production. Every person from the 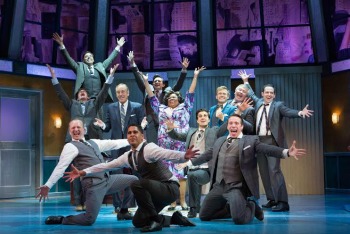 leads to the ensemble make this a stellar cast that is outstanding from beginning to end.  Performing this production poses potential risks in that the actor that plays J. Pierrepont Finch has to be comical, charming, scheming and likable. If an actor fails to portray all these traits well the show can be a disaster. Luckily, Jeremy Morse successfully portrays all the characteristics of J. Pierrepont Finch and he is delightful in this role. Audiences will love Morse in this role, especially in the opening number, “How to Succeed.” Mark Jacoby plays the character of J.B. Biggley, the president at World Wide Wicket Company. Jacoby is commanding in his portrayal of Biggley, and he is humorous in this role. Morse and Jacoby have audiences laughing with their song, “Grand Old Ivy.” Biggley’s nephew, Bud Frump, is played by Brian Shepard. Bud is mischievous and arrogant, and he wants to get to the top of the company by using his connections. Shepard gives a fine performance in this role, however, he seems to lack some of the social awkwardness that is usually an often seen characteristic of Frump. Becky Gulsvig plays Rosemary, a secretary at the World Wide Wicket Company who falls in love with Finch. Gulsvig portrays the innocent Rosemary well, and she easily makes the audience feel her emotions in the song, “Happy to Keep His Dinner Warm.” The duet between Morse and Gulsvig, “Rosemary” is full of passion, energy, and humor. Playing Rosemary’s friend, Smitty, is Cary Michele Miller. Miller seamlessly plays the head secretary who is always there to give advice to Rosemary. Miller has a great stage presence, and I really liked her performance along with Morse and Gulsvig in “Been a Long Day.” Amy Bodnar portrays Hedy La Rue, the attractive and simple-minded mistress of Biggley. I really loved Bodnar’s performance because she gives a lot of heart to this character. Jeff Coon plays Bert Bratt, the Personnel Manager. Anytime Coon is in a production, he adds to the depth of the show, and Coon gives a solid performance as Bratt. In addition, Joliet Harris’s performance as Mrs. Jones , the secretary to Mr. Biggley was outstanding. She brings a kindness and wit to Miss Jones, and her solo in the song “Brotherhood of Man” is superb. The song, “Brotherhood of Man” is one of the best songs in the production, and the night I was there it received astounding applause. Finally, I would be amiss if I did not mention the number, “Coffee Break.” This company number was one of my favorite songs in the show, and I loved the choreography in this number.

The creative team also need recognized for this delightful production. The director of this magnificent production is Casey Hushion. Michele Lynch is responsible for the wonderful choreography. Robert Andrew Kovach serves as the Scenic Designer, Lisa Zinni is the Costume Designer, Lighting Design was done by Paul Black, and Craig Beyrooti is the Sound Designer. Additionally, Douglass G. Lutz is the Musical and Vocal Director.

How to Succeed in Business without Really Trying runs at the Walnut Street Theatre through July 13, 2014. For more information and tickets visit their website at www.walnutstreettheatre.org or call their box office at 215-574-3550.

Final Thought: How to Succeed in Business Without Really Trying is highly entertaining and energetic. The entire cast is outstanding in this show, and the show is definitely worth a trip to the Walnut Street Theatre.