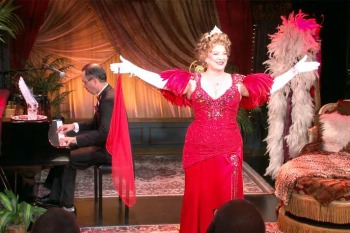 According to the Walnut Street Theatre, “In 1912 Sophie Tucker wowed Walnut Street Theatre audiences in Louisiana Lou, bringing down the house with a spoof of underworld dancing known as ‘The Puritan Prance.’” Sophie Tucker: Last of the Red Hot Mamas was created by Richard Hopkins, Jack Fournier, and Kathy Halenda in 2000, and since then the show has played in theatres in select cities across the United States and Canada. One of the creators, Richard Hopkins, directs the show. Sophie Tucker celebrates a one of a kind performer who paved the way for many entertainers such a May West and Bette Midler.

Kathy Halenda brilliantly portrays Sophie Tucker. Halenda comes out in a dazzling dress, and welcomes the audience to “Sophie’s private party.” She transports members of the audience back to the early 20th century where she makes people laugh, entertains with her outstanding voice, and even at times pulls at the heartstrings. The entire show is wonderful and she sings well known songs such as “Some of These Days” and “Let Me Call Your Sweetheart.” Throughout the show Halenda has audiences believing that she really is Sophie Tucker, she jokes about past husbands, as well as declaring, “I am satisfied to be who I am.” Her song: “I Don’t Want to be Thin” is a personal statement that is about being happy with who she is despite that she is not as thin as the “flapper girls.” Halenda’s performance of “The Lady is a Tramp” is energetic and one of the best songs on the show. In addition, her performance of “Yiddishe Momme” is sentimental and had a few audience members shedding a tear. Throughout Halenda’s performance she tells Sophie Tucker’s story: her upbringing, her past husbands and her relationships. Anyone who is a fan of Sophie Tucker or her music should not miss out on the opportunity to see Sophie Tucker: Last of the Red Hot Mamas at the Walnut Street Theatre.

In addition to Ms. Halenda, Jim Prosser is the pianist in the show, and he adds to the humor and the sentimentality of the show. Marcella Beckwith designed the dazzling costumes, and Bruce Price designed the stunning set.

For more information and tickets visit the Walnut Street Theatre’s website at www.walnutstreettheatre.org or call the box office at 215-574-3550. Sophie Tucker: Last of the Red Hot Mamas runs through December 29, 2013.

Final Thought: Sophie Tucker: The Last of the Red Hot Mamas is a show full of heart and soul. There is no other performer like Sophie Tucker, and Kathy Halenda brings the essence of this performer to life in this outstanding show.