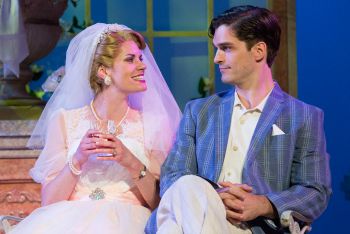 The Walnut Street Theatre opens its 207th season with Cole Porter’s High Society. This musical transports audiences to an estate in Oyster Bay in the late 1930s where a New York socialite is about to be wed. This grand musical is a show that is highly entertaining for audiences as they watch the plot unfold.  The Walnut Street Theatre brings High Society to life with lots of laughs, dazzling performances and a beautiful score.

High Society opened on Broadway in 1998, and the musical is based on Philip Barry’s 1939 stage comedy, The Philadelphia Story, and the 1956 movie musical, High Society. The book for the stage musical was written by Arthus Kopit and the music and lyrics are by Cole Porter with additional lyrics by Susan Birkenhead.  The musical tells the story of Tracy Lord, a flighty socialite, who is about to marry George, a lackluster executive of the Lord family. However, Tracy’s wedding weekend is interrupted when Dexter Haven, Tracy’s ex-husband, returns, and a pair of snooping reporters appear in order to write an expose on Tracy’s wedding. The score is rich with Cole Porter tunes such as “True Love,” “Let’s Misbehave” and “You’re Sensational;” and the performances are elegant and delightful.

Director, Frank Anzalone, has drawn together a stellar group of actors to bring High Society to life on the Walnut Street Theatre’s stage. Leading 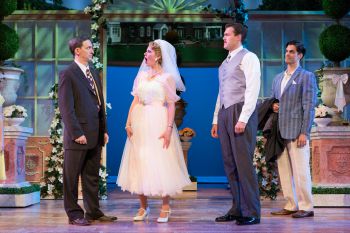 the cast is Megan Nicole Arnoldy as Tracy Lord. Arnoldy begins the show as an elegant and meticulous socialite and throughout the show her well laid plans start to unravel causing her veneer to cracks as she begins to show her true emotions and fall in love. Her facial expressions are priceless throughout the production, and she gives an exquisite performance. Paul Schaefer portrays Dexter Haven, and he is perfectly charming in this role. I felt that Schaefer’s performance was solid from beginning to end. What struck me most about Schaefer is his genuineness; there is a scene in which he explains to Tracy that he can no longer sail his boat, “True Love.” This scene is honest and sincere, and it is a beautiful scene between Schaefer and Arnoldy. In addition, the song, “True Love,” that Arnoldy and Schaefer sing is powerful and a perfect end to act one. The role of Dinah Lord, the witty younger sister of Tracy is played by Alexis Gwynn (she alternates this role with Cambria Klein.) Gwynn is excellent in this role, as the younger sister who schemes and speaks her mind. The dynamic between Schaefer and Gwynn is remarkable, and their scenes have a warmth that easily conveys their sibling-like relationship. Playing the role of the newspaper reporters, Mike, is Ben Dibble, and the newspaper photographer, Liz, is Jenny Lee Stern. These two actors have an incredible amount of energy, and their duet, “Who Wants to Be a Millionaire” is strong vocally, and both these amazing actors are impeccably animated in this song. Dan Schiff plays the lecherous Uncle Willie. Schiff employs highly energetic physical humor, and his scenes chasing Stern around the stage are full of hilarity. Jon Reinhold is flawlessly rigid as Tracy’s fiancé, George. His song, “I Worship You,” is an incredible vocal.  Rounding out this cast are Tracy’s parents, Margaret and Seth, played by Grace Gonglewski and Dan Olmstead. Both these fine actors have an incredible presence onstage, and both were perfectly cast as Long Island socialite parents.

In addition to this incredible cast, I need to mention the creative team. Robert Andrew Kovach designed the colorful set, which turned the Walnut’s stage into a mansion. Mary Folino created the beautiful and dazzling costumes. Mary Jane Houdina serves as the choreographer. Paul Black serves as the Lighting Designer and Will Pickens is the Sound Designer. In addition, Douglass G. Lutz is the Music and Vocal Director.

Final Thought: High Society is a show full of dazzling performances, great humor and fabulous music. It is a musical that will delight fans of Cole Porter, and those who enjoy an evening of fine entertainment. This is one of those shows that will amuse audiences from beginning to end, and it is a great way to spend a relaxing afternoon or evening.