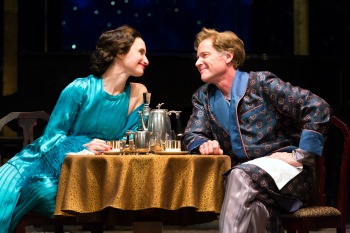 The latest show to grace the stage at the Walnut Street Theatre is Noël Coward’s Private Lives. Many have called this show Coward’s finest and funniest romantic comedy. This comedy is about a divorced couple, Amanda and Elyot, who have remarried and are on their honeymoon with their new spouses in France. What is a surprise to them is that while they are on their honeymoon, they discover that they are staying in adjacent rooms at the same hotel. Private Lives at the Walnut Street Theatre is full of sparkle and passion, and has a cast that will delight audience with their antics and liveliness.

Private Lives is a 1930 play by Noël Coward. There are those who say that Coward wrote the outline of this play in Shanghi during a two week period when he was recovering from the flu. The legend further says that it only took him four days to write the entire play, although he later polished it a bit. Private Lives opened in London in 1930, and it starred Coward, Gertrude Lawrence, Adrianne Allen and Laurence Olivier. The play made its Broadway debut in 1931, and has seen many revivals and a 1931 film.

The production of Private Lives at the Walnut Street Theatre, under the direction of Bob Carlton, has a stellar cast and a dazzling set. Playing 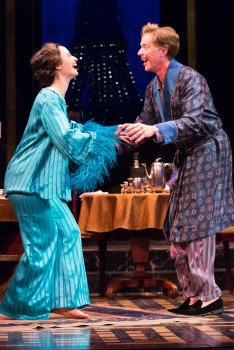 the role of the witty Englishman, Elyot Chase, is Greg Wood. Wood is quite charming and hilarious in this role. Playing the independent and dramatic Amanda Prynne is Kathleen Wallace. Wallace is lively and spirited in this role. The banter between Wood and Wallace onstage is fast and furious and delivered with rapier sharp wit. These two fine actors are highly animated while maintaining their sophisticated composure as they bring Coward’s world to life. In the role of Sibyl Chase, the young bride of Elyot is Lauren Sowa. Sowa brings an innocence and emotion to her character. Victor Prynne, a kind man who lacks zeal, is played by Dan Hodge. Hodge perfectly plays this stoic character. What I specifically loved about this cast is that they all exuded a dynamic energy that brought this play to life, and throughout the show they maintained their character‘s charm and charisma.

Another aspect of the show that needs mentioning is the set. The set, which in act one portrays a hotel in a seaside resort in France and in the final acts provides the ornate backdrop of a Parisian flat, is stunning and designed by Robert Koharchik. The lighting designer is Stuart Duke and the Sound Designer is Elizabeth Atkinson. In addition, Mark Mariani designed the beautiful costumes.

Private Lives runs at the Walnut Street Theatre Through March 1, 2015. For more information and tickets visit their website at www.walnutstreettheatre.org or call the box office at 215-574-3550.

Final Thought: Private Lives at the Walnut Street Theatre is full of sparkle and zeal. This show, full of wit and physical comedy, is the perfect show to cure the winter blues.