Walnut Street Theatre Presents a Holiday Tradition with A CHRISTMAS STORY: THE MUSICAL 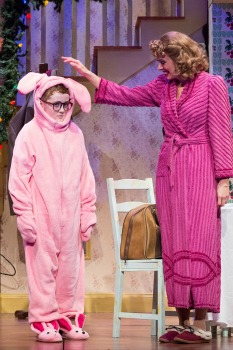 The infamous line, “You'll shoot your eye out!” from the holiday movie, A Christmas Story is just one of the many well-known lines audiences will hear in the Walnut Street Theatre’s production of A Christmas Story: The Musical. The musical is based on the 1983 film of the same name. This musical incorporates all the scenes people remember from the movie such as the leg lamp, the pink bunny suit and the BB gun. A Christmas Story: The Musical at the Walnut Street Theatre under the direction of James Rocco brings to life this iconic movie on stage, and fans of this movie will enjoy reliving their favorite movie moments onstage.

I have to admit that I have always found this movie a bit quirky, and it is not a part of my standard holiday movie viewing repertoire. However, I know that I am in the minority in this thought, and the musical version of A Christmas Story is just as unconventional as the movie. What I thought this musical did well, is that it brings to light the themes of tradition and family that may not necessarily come across in the movie. The book for A Christmas Story: The Musical is by Joseph Robinette and the music and lyrics are by Justin Paul and Benj Pasek.

The cast for the production of A Christmas Story at the Walnut Street Theatre are lively, and they embrace aspects of the characters that people are familiar with as well as add their own charm. In the role of Jean Shepherd, who serves as the narrator, is Bill Van Horn. Van Horn is perfect for this part as he is full of personality and immediately draws the audience into the story. Playing the role of Ralphie, the boy who has one mission, to convince his parents that he needs, “an official Red Ryder carbine action range model BB gun,” is portrayed by Craig Mulhern Jr. (he alternates this roles with Liam Keenan.) Mulhern is spirited and likable, and he is completely believable as Ralphie, as he does everything within his power to convince his parents he needs this BB gun. In addition, his vocals are strong in his song, “Red Ryder Carbine Action BB Gun.” Ralphie’s younger brother, Randy is played by Collin Jeffery (alternating with Timmy Woodward.) Jeffery is wonderfully cast in this role, as he brings out the fretfulness of a younger sibling, and he is amusing in the scene with the snow suit. Playing Ralphie’s parents are Lyn Philistine and Christopher Sutton. Philistine wonderfully represents a kind, gentle and tenderhearted mother. Her vocals in “Just Like That” are superb and tenderly demonstrate the love she feels for her family. Sutton as the father is animated and energetic. His scenes with Philistine perfectly capture the love he has for his family, and his scenes with the leg lamp are zealous and zany. In the role of Miss Shields. Ralphie’s teacher, is Ellie Mooney. Mooney steals the stage in her number, “You’ll Shoot Your Eye Out,” and throughout the show she enchants audiences with her dynamic performance. Rounding out this cast is Fran Prisco as the Santa at Higbee’s department store. Prisco perfectly embodies the iconic grumpy mall Santa with his boisterous performance.

As much as the musical numbers brought this show together for me, there are two numbers that stood out with their liveliness and the 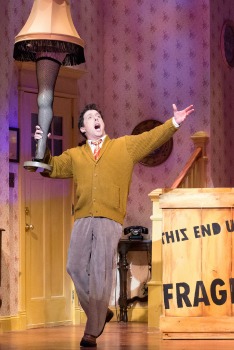 enthusiasm of the performers. The first is “When You’re a Wimp,” which features the Children’s Ensemble. These young performers are full of passion in this number. On opening night the performers in this number were: Craig Mulhern Jr., Collin Jeffery, Jacob Wilner, Josiah Jacoby, Anthony Flamminio, Aidan Brito, Lexi Gwynn, Jillian Henderson, Rachel McVey, Portia Murphy, Noah Schier, Gabrielle Schoener and Nick Williams. The other musical number that was the highlight of the show is Ellie Mooney’s number, “You’ll Shoot Your Eye Out,” which is full of strong vocals and incredible choreography by Linda Goodrich. This number is a glitzy number and Mooney shines in this song. The entire ensemble is stellar in this number, and the four dancers, Andrew Eckert, Christopher Shin, Jesse Jones and Billy D. Hart, are incredible as they vigorously tap dance along with Mooney.

A Christmas Story: The Musical at the Walnut Street Theatre runs through January 10, 2016. For more information and tickets visit their website at www.walnutstreettheatre.org or call the box office at 215-574-3550 or 800-982-2787.

Final Thought: A Christmas Story: The Musical at Walnut Street Theatre is a nostalgia-inducing musical. The Walnut’s production is full of zealous performances and energetic musical numbers. What this particular production does well is remind us that hope triumphs all obstacles while providing a healthy dose of humor and nostalgia.