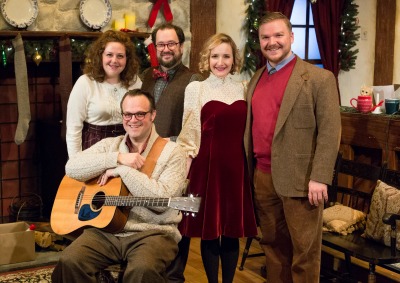 Walking into Walnut Street Theatre’s Independence Studio people are greeted with an atmosphere that is reminiscent of a holiday television special or a picture print from Currier and Ives. The set for A Child’s Christmas in Wales, designed by Scott Groth, is beautifully detailed and immediately creates an environment of holiday spirit.  A Child’s Christmas in Wales in the Walnut Street Theatre Independence Studio is engaging and the elegant simplicity makes this show a joy to see during this holiday season.

The production of A Child’s Christmas in Wales, under the direction of Aaron Cromie, at the Walnut Street Theatre is the Irish Repertory Theatre of New York's adaptation of Dylan Thomas's A Child's Christmas in Wales. A Child’s Christmas in Wales was originally written as a radio play in 1952. The production combines Thomas’s imaginative and warm tales with beautifully performed Christmas Carols. This play is a retelling of stories from past Christmases through a child’s point of view. It takes the audience on a journey to reminisce about the joys and nostalgia of youth, and takes us on a trip down memory lane.

The company of this show is charming to watch as they immediately infuse the audience with Christmas spirit. What was striking about this particular cast is not only does it appear that they are having a good time performing this show, but they also provide the impression that they have a great camaraderie offstage as well.  Each member of the cast play their own instruments throughout the show. In addition, the entire cast 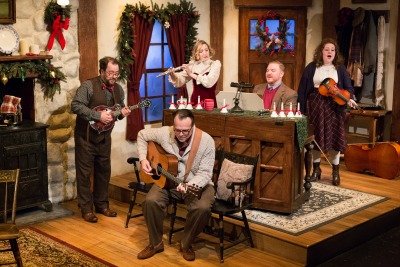 brought their own unique personality to stage and it felt like they were sharing their own personal and unique memories of past Christmases. Scott Greer has an inviting presence and he is a wonderful storyteller. Maggie Lakis is full of zeal throughout the show and she infuses the show with joy. Aaron Cromie gives an erudite performance, and this comes across as he tells each story as he is the authority on the tale. Matthew Mastronardi adds a high-spiritedness to the show, and he is a master at playing the piano. Rounding out this cast is Amanda Jill Robinson who seems wishful and romantic as she tells stories from past Christmas holidays. This cast gives an honest and heart-warming performance. A few of the highlights from the show are the song “Take My Hand,” which is a great ensemble piece. Also, “Ring Out the Bells” is a beautiful number. Some of the songs that add humor to the overall production are “Miss Fogarty’s Christmas Cake,” a salute to all those inedible holiday dishes, and “Aunts and Uncles,” a song about visiting relatives at the holidays. A Child’s Christmas in Wales at Walnut Street Theatre is a heartwarmingly wonderful holiday experience.

A Child’s Christmas in Wales runs at the Walnut Street Theatre’s Independence Studio on 3 through December 23, 2016. For more information and tickets visit their website at www.walnutstreettheatre.org or call the box office at 215-574-3550 or 800-982-2787.

Final Thought: A Child’s Christmas in Wales at Walnut Street Theatre’s Independence Studio on Three is a show infused with holiday spirit. The cast each brings their own unique personality to the production, and it is a wonderful nostalgic and heartfelt evening of entertainment.