Walnut Street Theatre Presents a Chilling AND THEN THERE WERE NONE 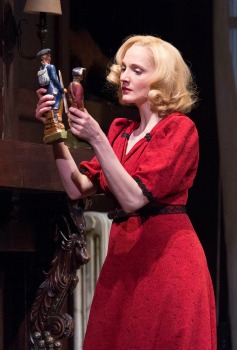 And Then There Was None is considered by some as Agatha Christie’s best mystery. After seeing the production at the Walnut Street Theatre I would have to agree with that. This play kept the audience on the edge of their seats as they tried to figure out who would be the last person standing in the show, and who the mysterious murder was. The story is about ten strangers lured to a remote island by a mysterious host for a getaway weekend, but what they encounter is a series of mysterious deaths as the guests are killed one by one. This play is Agatha Christie at her best, and this production has a spectacular set and a vibrant cast.

The plot of And Then There Were None centers around ten strangers who are mysteriously persuaded to a remote island by an enigmatic host for a getaway weekend, but what they encounter are a group of people who are not known to one another and a recorded voice accusing each of the group members of murder. Due to various predicaments, including turbulent weather, the guests are trapped on the island. The guests begin to die one by one and they soon realize that the deaths mirror the nursery rhyme “Ten Little Soldier Boys.”  And Then There Were None premiered in London in 1943, and on Broadway in 1944. Since the premiere of this play in 1943, this Christie masterpiece has been entertaining audiences for over fifty years.

Directed by Charles Abbott And Then There Were None is a suspenseful and well-performed murder mystery that will keep audiences on the edge of their seat. Abbott and the cast take Christie and this story seriously, and create a true whodunit, which was thrilling to watch as the plot unfolded. The entire cast of this production is full of exceptional actors who all seem to want to make sure they do not reveal too much in their performance in 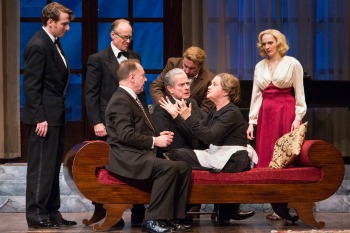 order to keep audiences guessing. Due to the size of the cast and the mysterious aspect of the show, I cannot write about them all individually, but I need to mention a few standout performances. Playing the role of Vera Claythorne, the young personal secretary, is Jessica Bedford. Bedford made her character extremely likable and genuine. Damon Bonetti portrays Phillip Lombard, a mysterious soldier who served in Africa; Bonetti creates an engaging character with a bit of bravado, his sarcastic remarks aide in lightening tense situations and he and Bedford have an amicable chemistry onstage that make these two characters standout. Peter Schmitz plays General MacKenzie, and he makes his character a genial gentleman, who seems to be very contemplative and not fully in tune with what is going on around him. Playing the character of William Blore is Laurent Giroux. Giroux gives a wonderfully bold and animated performance as the detective who slowly falls into a state of paranoia. Lastly, I need to mention Greg Wood as Sir Lawrence Wargrave. Wood is commanding and expressive as he convincingly portrays this level headed character who logically approaches the situation and gathers the facts while attempting to suppress his anger and outrage.

This production has incredible attention to detail that is seen from the time audience members walk through the door until the final curtain. As a person walks into the theatre there is a huge projected representation of the mansion situated on a remote island, and as the story progresses, this imagery takes on the life of the story. The people responsible for this are Kendall Smith who serves as the Lighting and Projection Designer and Dan Roach who is the Video Designer. Andrew Thompson designed the intricate and grand set. Julia Poiesz designed the costumes, which were individually suited to the personalities of each of the characters. Sound Designer, Christopher Colucci, lends his talents to the mysterious mood of the show.

And Then There Were None runs through April 26, 2015. For more information and tickets visit their website at www.walnutstreettheatre.org or call the box office at 215-574-3550.

Final Thought: And Then There Were None at the Walnut Street Theatre is a fine production of Agatha Christie’s masterpiece. This show has a great story and a delightful cast. Everything works together to keep the audience on the edge of their seats as they try to figure out who will be the last standing in this play.