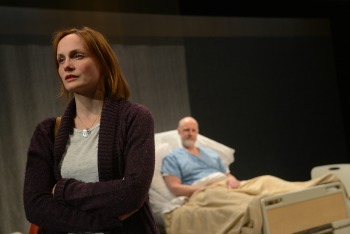 When I heard that the Arden was doing a play called Under the Skin, a show about organ donation, I was unsure what to expect. What I imagined is that it would be a play that is emotional, dark and full of complicated relationships. However, Under the Skin is a pleasant surprise, it is a wonderful story that is engrossing and touching, and about human relationships. As one of the characters, Raina, states at the beginning of the show, “This story is not about kidneys . . . it is about the human heart.” This one sentence sums up the show perfectly. The Arden’s production of Under the Skin is brilliant, as the show has an engaging story and powerful performances.

Under the Skin, a world premiere play, is a show written by Michael Hollinger. This is Hollinger’s eighth world premiere production at the Arden Theatre. This show is also the first time Hollinger and director, Terrence J. Nolen, have worked together since 2006. The show tells the story of Lou (Douglas Rees), a man dying of kidney failure, who visits his estranged daughter, Raina (Julianna Zinkel), to ask her to donate one of her kidneys. Under the Skin is a play about humanity, about relationships and forgiveness, as well as a heartwarming story where the audience will be engrossed in the lives of the characters onstage.

Douglas Rees plays Lou Ziegler, a man who is dying from kidney failure and seeks out his daughter, Raina, to ask for a kidney. There is tension 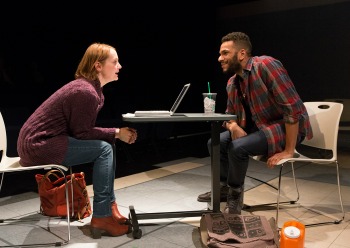 between Lou and his daughter. Lou is non-apologetic for the things he has done in the past, but there are moments in the play where Rees reminds us that after all his character’s short comings he is basically a good person. Julianna Zinkel plays Raina Lamott. Raina is complicated and she unravels as the audience witnesses this character’s journey of acceptance and forgiveness. Zinkel depicts her character’s sarcasm and anger with vigor. However, it is watching Zinkel’s depiction of her character’s struggle with recovering from a loss that allows the audience to connect with her. Zinkel gives a remarkable performance in this play. Biko Eisen-Martin plays Jarrell Hayes and Hector, a nurse at the hospital. Eisen-Martin is energetic and witty, he adds hope and lightness during tense moments in the play. In addition, he and Zinkel have a great dynamic onstage that make their scenes some of the strongest in the production. Alice M. Gatling plays Jarrell’s mother, Marlene Hayes, as well as Dr. Badu and an overworked barista. Gatling is a strong presence onstage and she gives a powerful performance in all her roles. 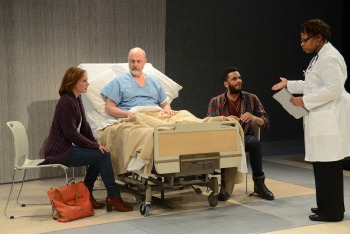 Under the Skin is an exceptional show that will take the audience on a journey to explore family relationships and the connectedness of being human. The show runs through March 15, 2015. For more information and tickets visit their website at www.ardentheatre.org or call the box office at 215-922-1122.

Final Thought: Under the Skin at the Arden Theatre is a masterful play. It is about the subject matter of organ donation, but the play explores so much more than this. It is a captivating play that is touching, insightful and heartwarming. This Hollinger play is one that should not be missed.

Photo 1: Julianna Zinkel as Raina Lamott and Douglas Rees as Lou Ziegler in Arden Theatre Company’s production of Under the Skin. Photo by Sabina Louise Pierce.

Photo 2: Julianna Zinkel as Raina Lamott and Biko Eisen-Martin as Jarell Hayes in Arden Theatre Company’s production of Under the Skin. Photo by Mark Garvin.