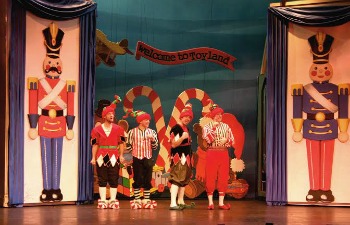 Just in time for the holidays, the Fulton Theatre’s Family Series opens with Twas the Night before Christmas. The Fulton’s Family Series is an excellent way to introduce children to live theatre, and this production adults will enjoy just as much as the children. This production is full of humor, beautiful music, and amazing dancing that any child and adult are sure to love.

The company of this show are highly animated and excellently cast to bring to life this well-known bevy of characters. In the role of Charlotte, the girl who finds a secret way into Toyland and meets a zany group of misfits, is Stephanie Jo Wise.  Wise seamlessly portrays Charlotte’s innocence and her song “Wanting to Believe” is delightful and the music of this piece is beautiful. Marc Robin plays Rudolph and he brings a great deal of heart to this role. Robin has one of the best songs in the show, “Let it Glow,” and this number is passionate and heartfelt. Missy Dowse portrays the Snow Queen and she is enchanting and adds humor to the show. The most humorous duet in the show is “We Gotta Stop This Girl” which is sung by the Mouse King (Andrew Kindig) and the Gremlin (Steve Calzaretta). Kindig and Calzaretta are fantastic in this show, and they add generous helpings of levity and energy to this song. Michael Biren as the Nutcracker provides stunning dancing, especially in the number “Russian Dance.” The entire cast of this show is amazing, they will take you on a magical journey that will make you laugh, sing, and tug at your heartstrings. Do not miss the opportunity to see this original family-friendly musical at the Fulton Theatre.

Twas the Night before Chrismas is directed by Curt Dale Clark and Mark Robin. Aaron McAllister serves as the musical director. Marc Robin choreographed this production. William Mohney is the scenic designer and Brittany Leffler is the costume, hair and makeup designer. All involved with this show need to be commended on the superb job they did putting this show together.

Twas the Night before Christmas runs at the Fulton Theatre through December 28, 2013. For more information and tickets call their box office at 717-397-7425 or visit their website at www.thefulton.org.

Final Thought: Twas the Night Before Christmas is a delightful family-friendly musical for the holidays. It is a show that is filled with humor, beautiful songs, and an energetic cast of characters.