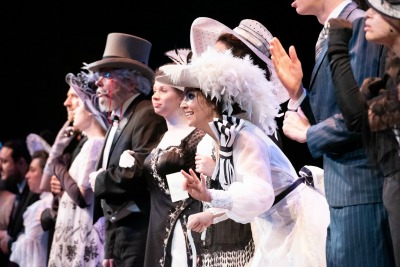 Last week I attended my first show at Servant Stage. Part of their mission statement is “Servant Stage Company joyfully serves our community by making outstanding shows easily accessible to everyone.” I think having a theatre company that is based on donation only is such a vital part of any Arts community and I am thrilled to have discovered them. I met so many lovely people in the audience during the night I was in attendance and there were a number of people telling me about past shows they have seen done by Servant Stage. I loved hearing the enthusiasm from members of the audience about how much they enjoy the shows. Currently, Servant Stage Company is doing a production of My Fair Lady under the direction of Bonnie Bosso. It is a classical interpretation of the show and it includes a large and zealous cast, beautiful costumes, a splendid set and some amazing performances.

My Fair Lady is a musical that many people are familiar with and love. The music is by Frederick Lowe with the book and lyrics by Alan Jay Lerner. The musical is based on George Bernard Shaw’s 1913 play Pygmalion, which was named after a mythological Greek sculptor who falls in love with his own ivory sculpture than comes to life. The basic plot of the musical, My Fair Lady, is about how Professor Henry Higgins bets his colleague Col. Pickering that he can turn a poor cockney flower girl, Eliza, into a lady and then present her at a high society ball. The musical, My Fair Lady, first appeared on Broadway in 1956 and it led to several revivals and a film.

I always imagine that one of the most difficult roles in this show is the role of Eliza Doolittle. Leslie Talley who plays Eliza in this production is 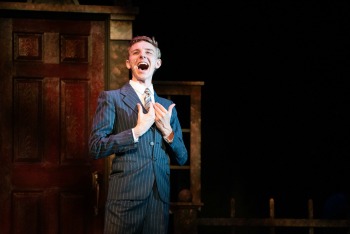 excellent. Talley gave an outstanding performance and she did a great job tackling such a difficult role. All her songs throughout the show were strong, and I thought she excelled at the songs “Just You Wait” and “Without You.” Chris Wert who plays Henry Higgins is equally good in his role. Wert delivered the pompousness and egotist tone the role requires. I thought he worked well with Pickering and Eliza. In addition one of his best numbers in the show was “I’ve Grown Accustomed to Her Face.” Jon Rider is splendid as Col. Pickering. Rider gives a warm likability to his character. Playing Eliza’s drinking and womanizing father, Alfred P. Doolittle, is Dan Lehning. Lehning brings enthusiasm to the role. In the role of Freddy Eynsford-Hill, a young socialite who adores Eliza, is Nik Olsen. Olsen is very lively in the role and a pleasure to watch. All his vocals were magnificent especially in the song “On the Street Where You Live.” Another outstanding performance comes from Donna Schilke who plays Henery’s mother, the stately Mrs. Higgins. Schilke is stellar as she coveys the majestic aspect of Mrs. Higgins and her scenes are wonderful, especially the “Ascot Gavotte.” One more thing that needs mentioning is that with a show this large it would not be successful without an enthusiastic ensemble. The ensemble for this production is infused with energy and they were enjoyable to watch in the larger musical numbers. 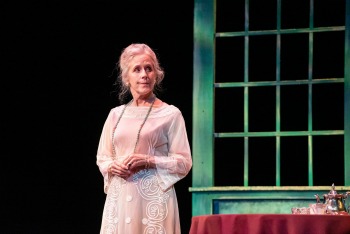 This production is definitely a labor of love and that definitely comes through while watching the show. I also need to mention the Artistic Team behind the show. The lush set was designed by John Whiting. The beautiful and period appropriate costumes were designed by Priscilla Barden Kaufhold. Aaron Crosby is the Lighting Designer and Shaun Ressler is the Audio Designer. The enjoyable choreography was by Dan Deal. Lastly, Kendra Bigley serves as the Music Director.

Servant Stage’s production of My Fair Lady runs through June 15, 2019 at the Winter Center at Millersville University. For more information and tickets please visit their website at www.servantstagecompany.com/shows/my-fair-lady.

Final Thought: Servant Stage’s production of My Fair Lady is a rather classical interpretation of the beloved musical. The show includes a zealous cast, beautiful costumes and wonderful orchestrations. The show is a fun night and audiences will be sure to be humming songs from this beautiful score.

Sounds like a fun evening...and I love the philosophy of this company

What a great production of a wholesome, lovable musical. Servant Stage never disappoints -- and we have been to many performances.