Theatre Review: ROUNDING THIRD at Gretna Theatre is a Homerun 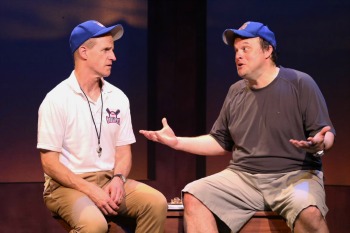 Currently onstage at Gretna Theatre is the play, Rounding Third. This play is a hilarious look at two men sharing the responsibility of coaching a Little League team. The show is witty, amusing and audiences are sure to have a good time as the personalities of these two very different coaches, Michael and Don, evolve.  The production of Rounding Third at Gretna Theatre is funny and heartwarming, with characters and story lines we can all relate to. Director, Matt Pfeiffer, and both actors do an excellent job with making this play funny and relevant.

Rounding Third, written by Richard Dresser, is a play that tells the story of two Little League coaches, who have very different attitudes towards the game. One coach, Michael, is the assistant coach who has little knowledge about baseball and how the game is played. The other coach, Don, has been coaching Little League for years and was part of a team in his childhood. This production of Rounding Third at Gretna Theatre is moving, full of energy and intelligently funny. It is a wonderful way to spend an evening. 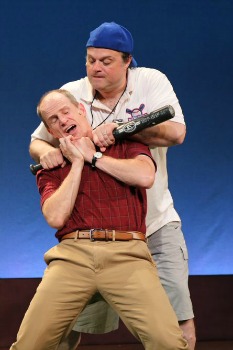 in their roles and they move the story along. Greer plays Don, a rough around the edges, tough-skin, blue-collar worker who believes winning is everything and is willing to enter some rather grey areas to reach those ends. Greer gives his character a rough edge, but also makes him relatable. In addition, Greer’s rants about how winning is everything and his ever changing rules of coaching are hysterical. Lawton plays Michael, a new assistant coach who has an office job with a large corporation. His attitude toward Little League is that the kids should do their best, have fun and not worry about winning or losing. Lawton brings humanity and optimism to this character and plays well off Greer. Throughout the show Lawton brings to light how Michael is trying very hard to make the best of a bad situation when having to coach with Don.  What I respected about both Lawton and Greer’s performance is the way they both breathed emotional life and depth into their characters and made them memorable and relatable. This show is about so much more than the conflicting opinions of two coaches; it is also about friendship, family, finding common ground and the humanity within each of us.

I also need to mention the artistic team. Enhancing the production is the set designed by Jorge Cousineau. Diana Duecker is the Lighting Designer and Johnathan Shuey and Jorge Cousineau are the Sound Designers. In addition, Alison Roberts serves as the Costume Designer.

Rounding Third runs at Gretna Theatre through June 30, 2019. For more information and tickets please visit their website at www.gretnatheatre.org or call the box office at 717-964-3627.

Final Thought: Rounding Third at Gretna Theatre is an entertaining and amusing play. This is an outstanding production under the direction of Matt Pfeiffer with superb performances by Scott Greer and Anthony Lawton. It is a wonderful theatrical experience and audiences will get a good laugh as the banter between Michael and Don evolves throughout the play. The show is intelligently funny and a play that should not be missed.