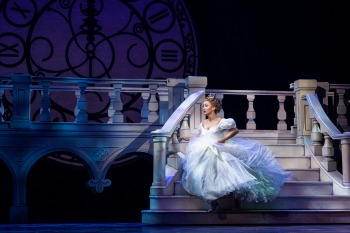 Currently onstage at Paper Mill Playhouse is Rodgers and Hammerstein’s Cinderella and it is a wonderfully enchanting show. Paper Mill Playhouse has the ability to infuse their fairy tale based musicals with pure joy and magic. Last season Disney’s Beauty and the Beast was delightful and now their production of Cinderella is entrancing. The show draws the audience into the world of Cinderella and transports them into a magical world filled with fairy godmothers, dragons and a narcissistic stepmother. The cast is extraordinary, the costumes are stunning and the set is beautiful. This production of Cinderella features a strong and determined Cinderella, wonderfully played by Ashley Blanchet, who reminds us all that kindness is what really matters.

The musical Cinderella includes a book and lyrics by Oscar Hammerstein II and music by Richard Rodgers. The musical was originally written for television and it aired live on CBS in 1957. This televised version starred Julie Andrews as Cinderella. Since then it was remade for television twice and adapted into a number of stage versions. In 2013 the show debuted on Broadway with a new book by Douglas Carter Beane. The production at Paper Mill Playhouse is a modern spin on this classic fairy tale and it is a delight for audience members of all ages. This production is directed by Mark S. Hoebee and choreographed by Joann M. Hunter.

One of the things that I really enjoyed about this production of Cinderella is that no one was trying to recreate a character, each member of the cast made the role their own. This is one of the most entertaining and wonderful productions of Cinderella I have seen. Ashley Blanchet’s Ella is empowered and unwavering. She immediately brings to life the kindness and generosity of her character. Her performance of “In My Own Little Corner” is beautifully performed and conveys Ella’s hopes and dreams. One of my favorite scenes in the show is the ball scene and the dance number between Ella and Prince Topher. Billy Harrington Tighe plays Prince Topher and he is refreshing and exuberant. Tighe and Blanchet have 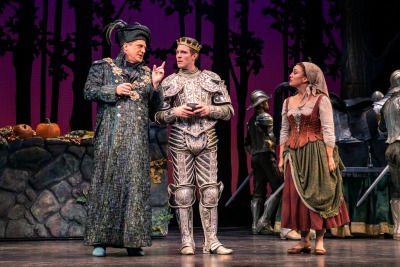 great chemistry with one another, and their characters are wonderfully developed as they fall in love. The dance number at the ball, “Waltz for a Ball” is exquisitely choreographed and performed, as is the song “Ten Minutes Ago.” Playing Sebastian, Prince Topher’s guardian, is Christopher Sieber. Sieber gives an excellent performance portraying a character who is cunning and has an oppressive view of the lower classes in the Kingdom. In this production, Sieber does not have a big show stopping number, instead he is a master at reacting to things going on around him onstage. He was a pleasure to watch in this role. Playing Madame, Ella’s stepmother, is Dee Hoty. Hoty’s performance is the perfect blend of narcissism and selfish cruelty as she is constantly distressing Ella. Playing Ella’s stepsisters, Gabrielle and Charlotte, are Rose Hemingway and Angel Lin. Both Hemingway and Lin dynamically portray the differences between the two characters. Hemingway’s Gabrielle is in love with the town revolutionary, Jean-Michel, while Lin’s Charlotte is primarily concerned with her own vanity and self-promotion. Andrew Kober plays Jean-Michel and he is hysterical as the town revolutionary who tries to fight social inequality in the kingdom. Lastly, I want to mention Donna English who plays the Fairy Godmother. English is fabulous in this part as she transforms from Marie into the Fairy Godmother. In addition, her vocals in “Impossible” are incredible and one of my favorite performances in the show. 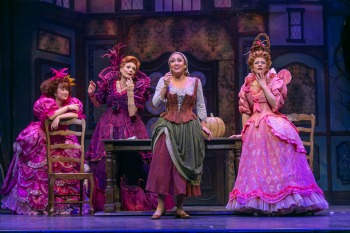 One more thing I need to mention is the creative team behind this show. William Ivey Long designed the spectacular costumes. Watching the “theatre magic” and how these characters visually transform onstage is simply remarkable. Anna Louizos designed the stunning set. Charlie Morrison is the Lighting Designer and Matt Kraus is the Sound Designer. Lastly, Music Direction is by Michael Borth.

Rodgers & Hammerstein’s Cinderella runs at Paper Mill Playhouse through December 29, 2019. For more information and tickets please visit their website at papermill.org or call the box office at (973)376-4343.

Final Thought: Paper Mill Playhouse’s production of Rodgers & Hammerstein’s Cinderella is a show that is bursting with magic and enchantment.  Each member of this exquisite company make up a cast of characters that are full of originality and unique personalities. This is not the Cinderella of my childhood, it is a fresh new telling of a classic tale and it is better. In the end, the message bestowed by this musical reminds us all that in the end kindness always wins and to be honest I feel this message is more timely today than ever.