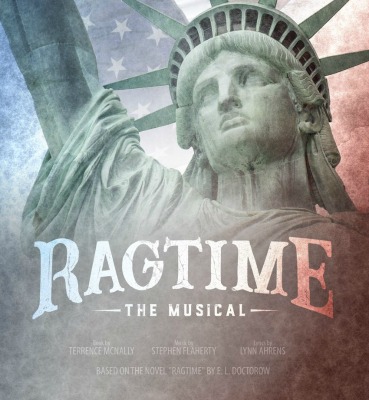 Sitting in the theatre last week I was awestruck by the power of the musical Ragtime at Ephrata Performing Arts Center. I have always had a fondness for this particular show, but there is something very special about the production at Ephrata Performing Arts Center. This show is a labor of love from the direction to the cast to the crew. There is such a passion that came through in this production that it still is affecting me as I sit down to write this review. Ragtime, under the direction of Edward R. Fernandez, is exceptional as it tells a multi-strand story of three families in America around the turn of the twentieth century. It is a magnificent musical that portrays the American experience with a lush score, elegant choreography and an exquisite cast. This production of Ragtime at Ephrata Performing Arts Center is glorious and one of the most inspired shows you will see this season.

The musical Ragtime is based on the 1975 novel by E.L. Doctorow with a book by Terrance McNally, music by Stephen Flaherty and lyrics by Lynn Ahrens. The show is a musical portrait of life in America at the turn of the twentieth century. It tells the story of three families, each of which represent a distinct societal group of Americans and their experience during the sweeping changes happening in America during this time. The three families represented are an upper-class Caucasian Victorian family, an immigrant Jewish man and his daughter, and an up-and-coming African American musician of ragtime and his lost love who he is trying to win back her affetions. Also, the stories from these three groups of people all intertwine to create the dynamic story that is Ragtime. Their story is told through music, dance and dialogue, and what results is a remarkable and grand musical about life at the turn of the twentieth century. In addition, the story of Ragtime is timeless and it feels very relevant to have this musical onstage currently, as it seems to speak to societal issues that are still with us today. I am so grateful that EPAC decided to do this show in their 2019 season.

The upper-class Victorian group are represented by family members Edgar (Noah Woods,) Father (Preston Schreffler,) Mother (Stacia Smith,) Younger Brother (Rick Kopecky,) Grandfather (Gene Ellis) in addition to the New Rochelle Citizens. This entire group is populated with talent. Smith as Mother is incredible and she brings a kindness and sincerity to the role. Her vocals in “Back to Before” are exquisite and powerful.  This number speaks to the changing roles of women and to her own awakening and Smith delivers this song with a huge dose of emotion. Schreffler brings a joviality to the role of Father, which I quite enjoyed. It was through his reactions that the audience can see how times and attitudes are changing, and he is unsure how to react to the change occurring around him. Personally, I enjoyed Schreffler’s performance throughout the show, and he especially shined in the song, “What a Game.” It brought a much needed dose of levity at this point in the show. Schreffler’s impatient response to the hocking and spitting in unison around him against the excitement and delight of his son, Edgar, is a joy to watch. Woods gives an energetic performance as Edgar. He successfully portrays an innocent young child during this time, as he experiences the world changing around him. In addition, Woods is a charming delight to watch in the role. Ellis as Grandfather shows wit when delivering his one-liners throughout the show. Mother’s Younger Brother played by Kopecky is exuberant in this role. He masterfully exhibits his character‘s transformation from a young man searching for himself into a man seeking to change the world after hearing Emma Goldman speak at Union Square.

One of the most poignant storylines in the show comes from the storyline revolving around Coalhouse Walker Jr. (Randy Jeter.) Coalhouse Walker Jr. is a Harlem jazz pianist who falls in love with Sarah (Yolanda Dwyer) and who eventually fights against injustice done to him. Jeter’s charm and connection to the character draw the audience into Coalhouse’s plight. Jeter is absolutely excellent in this role and his performance in “Let Them Hear You” is full of passion and emotion. This song is chill-inducing and inspirational, and Jeter was brilliant in his rendition of this number.  Dwyer’s performance as Sarah is superb.  The love story between Coalhouse and Sarah will tug at the audience’s heartstrings. Dwyer is vocally stunning especially in her solo “Your Daddy’s Son.” This is a gorgeous rendition of this heartfelt song. One more person I need to give credit to is Breanne Sensenig. She gives the audience an emotional punch with her song “Till We Reach That Day.” Her vocals are dynamic in this number and it is one of the best performances I have seen in this show anywhere.

The last group this story revolves around are people who are newly immigrated to America. In the musical, the immigrant portion of the story is represented by Tateh (Sean Young,) a man who loves his daughter (Maya Hartz) and who sells silhouette portraits to make a living to survive. Young is outstanding in this role. As much as I always enjoy Young’s vocals, I thought where he stood out in this production was during the scenes in which he is frustrated and angry. There is a particular scene in act one when someone asks Tateh how much it would be to buy his daughter. The anger that Young illustrates at that moment is something that the audience can viscerally feel. In that particular moment the audience can feel Tateh’s rage at the thought that someone would even think of trying to buy someone’s beloved child. Young is incredible in this role. Furthermore the interaction between Young and Maya Hartz, who plays his daughter, elicits warmth and a sense of empathy towards their plight. The scenes between Young and Hartz are tender and heartwarming. Another excellent performance is from Tricia Corcoran who portrays Emma Goldman. Corcoran is spectacular in the role as she impeccably displays Goldman’s fiery passion.

The incredible ensemble also deserves applause in this production.  They played multiple characters to move forward the momentum. There is not a weak spot in this entire production. The actors in EPAC’s production of Ragtime are full of spirit and emotion as they bring to life this amazing epic story.

Another thing I want to call attention to is the set. There is a revolving stage for this show and it worked extremely well in telling this story. I thought the staging was well done for this show and that all the pieces came together for this brilliant production. The set was designed by Mike Rhoads. Kristin Pontz serves are the Choreographer. Zach Smith is the Music Director. Jeff Cusano is the Lighting Designer and Shaun Ressler is the Sound Designer. Lisa Harris and Carolyn Smith designed the period appropriate costumes. Additionally, Alexander P. Bannon is the Stage Manager.

Ragtime runs at EPAC through May 11, 2019. For more information and tickets visit their website at www.ephrataperformingartscenter.com or call the box office at 717-733-7966.

Final Thought: Ragtime is one of the most ambitious shows I have seen EPAC produce, and this show is a triumph. The direction by Edward R. Fernandez and the performances by the cast are full of passion and zeal. This production of Ragtime is pulled off with panache, and trust me, you do not want to miss it.