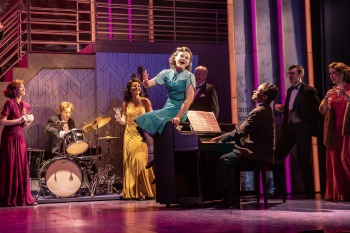 Recently there appears to be a heightened interest in popular media about Judy Garland and her life. There is new movie, Judy, starring Renée Zellweger, and there is a historical fiction book released earlier this year Finding Dorothy by Elizabeth Letts. The buzz around both these stories have rekindled an interest in Judy Garland who is best known as playing Dorothy in the 1939 film, The Wizard of Oz. The musical, Chasing Rainbows: The Road to Oz, takes a look at what Garland’s life was like before the making of The Wizard of Oz and her relationship with her family. The production of Chasing Rainbows at Paper Mill Playhouse under the direction and choreography of Denis Jones is a triumph. The show is full of well-known songs, big dance numbers and a big dose of nostalgia that audiences will love. It is a show that is full of emotion and heart and one cannot help but leave the theatre with a sense of hope.

The basic plot of Chasing Rainbows: The Road to Oz is the story of the rise of Frances Gumm and show she became the icon Judy Garland. The musical chronicles her early stage career in the days of vaudeville as part of the Gumm Sisters to obtaining the role of Dorothy in the MGM movie The Wizard of Oz. In addition to Garland’s rise to fame, the musical is also about her family and her relationship with her sisters, her parents and the people she meets in Hollywood. The musical illustrates how Judy navigated her way in the film industry until she finally landed the role of Dorothy in The Wizard of Oz. Chasing Rainbows: The Road to Oz has a book by Marc Acito, musical adaptation and additional music by David Libby and conceived by and additional lyrics by Tina Marie Casamento. 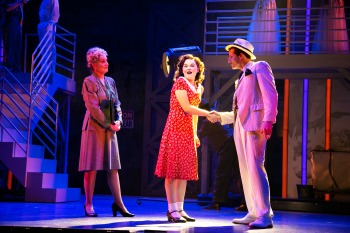 was like for women in the 1930s. They had to be tall and beautiful, and stand-out from everyone else. Additionally, I appreciated how the musical featured many strong female roles throughout the show including Judy Garland, her mother, Ethel, and Kay Koverman, who was Louis B. Mayer’s executive secretary. There is an honesty and sincerity that comes through in the story and in the musical numbers of this show, and it made this musical a poignant piece of musical theatre.

Playing the role of Judy Garland is Ruby Rakos. Rakos is perfect in this role as she seems to embody the mannerisms of Garland and has a powerful and robust voice. In addition, Rakos makes this role her own. She does not do a Garland impression, but she skillfully represents some of Garland’s familiar body language without making it feel like an impersonation. One of my favorite numbers that Rakos sings is “Zing! Went the Strings of My Heart.” The song is perfectly performed, has a lot of power and audience members cannot help but smile as Rakos sings this number. Playing Garland’s mother, Ethel Gumm, is Lesli Margherita. Margherita infuses her role with a great deal of personality and strength. Ethel made sacrifices to make sure Judy was noticed and became a star, and through Margherita’s performance audiences can see how Ethel was determined to make sure Judy succeeded. Also, her 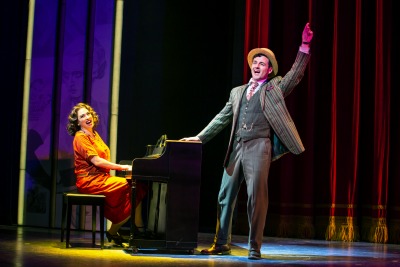 vocals with Max Von Essen in the song “You Made Me Love You” are powerful. Playing Frank Gumm, Judy’s father who she had a very close relationship with is Max Von Essen. Von Essen illustrates the complexity of his character and how he dearly loved his family. One of the sweetest moments of the show is at the beginning when he is singing to a young Frances Gumm (played by Sophie Knapp.) He sings “Always/Remember” and it is exquisitely performed. Another strong performance in this show comes from Karen Mason who portrays Kay Koverman, Louis B. Mayer’s executive secretary. She instills this role with an ingeniousness that makes sure her character does not seem cunning, but sly in the way she convinces Mayer to cast Garland in The Wizard of Oz. Mason’s performance is a highlight of the show. Another highlight in the show is Colin Hanlon as Roger Edens, who was a composer and arranger for MGM. Hanlon adds a warmth to the stage as his character befriends Judy during her time working at MGM. Michael Wartella gives an animated and energetic performance as Mickey Rooney. The show-stopping number in this show is the song “All Ma’s Children” and Wartella shines in this number. He is full of energy and animation and audiences cannot help but adore his performance. One more person I need to mention is Violet Tinnirello as Shirley Temple. Tinnirello brings out the sassy side of Shirley and she is delightful to watch.

A show as big as this with such large and energetic dance numbers would not be possible without the ensemble. I want to give a shout out to 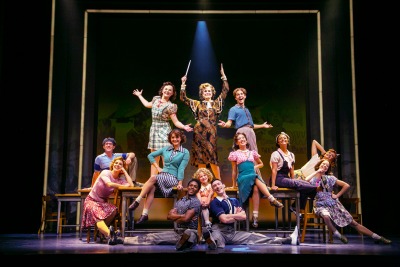 them in this review because they made this show memorable and each and every one of them brought an energy to the stage. The members of the ensemble of Chasing Rainbows are: Tia Altinay, Mackenzie Bell, Lamont Brown, Joe Cassidy, Clara Cox, Tessa Grady, Kimberly Immanuel, Sophia Knapp, Molly K. Lyons, Christina Maxwell, Kevin B. McGlynn, Allsun O’Malley, Samantha Joy Pearlman, Drew Redington, Parker Slaybaugh, Sean Thompson, Violet Tinnirello and Kathy Voytko.

Also the Artistic Team for this show needs mentioning as they did an incredible job with this show. Scenic design is by Alexander Dodge.  Linda Cho designed the gorgeous costumes. Lighting design is by Japhy Weideman and Sound Design is by Matt Kraus. The production stage manager is Bonnie Panson. Lastly, orchestrations are by Larry Blank and David Libby.

Chasing Rainbows runs at Paper Mill Playhouse through October 27, 2019. For more information and tickets visit their website at papermill.org or call the box office at (973)376-4343.

Final Thought: Chasing Rainbows at Paper Mill Playhouse is a delightful musical that is a special treat for audiences as it is optimistic and genuine. The show is emotionally moving as it portrays the life of Judy Garland before The Wizard of Oz. It also is filled with high energy dance numbers that feel modern, but are also reminiscent of the big dance numbers in musicals of the early 20th century.