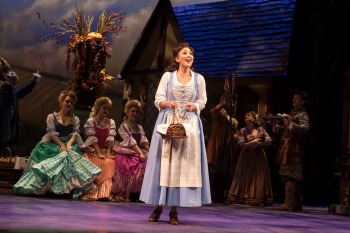 There is nothing more extraordinary than sitting in a room full of people, adults and children, who are full of anticipation to see a theatre production. That was exactly my experience sitting in the theatre of Paper Mill Playhouse before Disney’s Beauty and the Beast. This is a musical that people of all ages love for many different personal reasons. The production of this show at Paper Mill Playhouse is absolutely stunning. I have seen this musical more than any other musical and I have to say this is the best production of Disney’s Beauty and the Beast I have seen. Everything from the casting to the set to the lighting and costumes was spot on and made this an incredibly memorable and enchanted production. Director, Mark S. Hoebee, and the cast and crew of Disney’s Beauty and the Beast have created a magical and enchanting experience that truly draws the audience into the world of this beloved story.

The musical, Disney’s Beauty and the Beast, is based on the 1991 animated Disney movie of the same name. The stories for both the musical and film are based on the classic French fairytale by Jeanne-Marie Leprince de Beaumont. The musical features the same characters many are familiar with - a bright young heroine named Belle, her narcissistic and loutish suitor Gaston, a cursed young prince and an enchanted castle. It is a tale for people of all ages and the production at Paper Mill Playhouse is full of special effects, dazzling production numbers and an exquisite cast.

There is no one more fitting to play the role of Belle than Belinda Allyn. Allyn’s Belle is warm, independent and intelligent. Her vocals are powerful 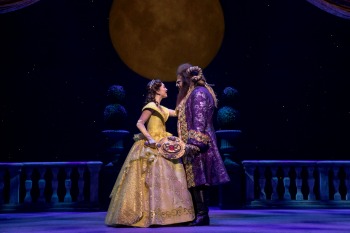 and her performance was full of emotion. Her song “Belle (Reprise)” was so beautiful that it gave me chills. In addition, when Allyn steps onto the stage in the quintessential yellow dress she is beaming. Tally Sessions is also excellent as the Beast. What I loved about this character is that even though he has makeup and prosthetics to make him seem more beastly, his emotions are easily seen through his facial expressions. What I especially enjoyed about Sessions’ performance is watching how his character evolved from being boorish and insecure to someone who learned how to love and care about others. Additionally, his vocals in “If I Can’t Love Her” are dynamic. In the role of Gaston is Stephen Mark Lukas. Lukas is simply perfection as Gaston. His narcissism, conceited swagger and comedic timing are outstanding. His performance in the number “Gaston” is remarkable and one of the best in the production. “Gaston” is a huge dance number full of brilliant choreography by Alex Sanchez. Gaston’s sidekick, Lefou, is portrayed by Kevin Curtis. Curtis has the difficult task of playing a character that was designed to almost to be a caricature, and he makes this character stand out and gives a memorable performance. He is agile, humorous and zany. He does an admirable job in what is a demanding role and Curtis and Lukas work well together as Gaston and Lefou. Playing Maurice, Belle’s Father, is Joel Blum. Blum is wonderfully eccentric in this role as the quirky inventor. In addition, his song, “No Matter What,” was incredibly emotional. This scene between him and Belle was sentimental and wonderfully performed. In the roles of Lumiere and Cogsworth are Gavin Lee and Kevin 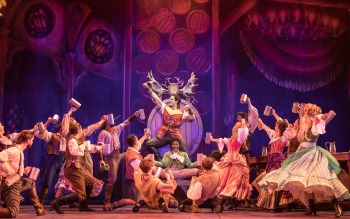 Ligon. Lee is flirtatious and hopeful as Lumiere and he works well off of Ligon as they establish a feeling of being old friends. In addition, the number “Be Our Guest” is a grand and zealous number that will makes audiences want to jump to their feel and applaud after its big finale. This number is quite simply exceptional. Stacia Fernandez plays Mrs. Potts and gives an air of optimism in this role. Playing her son, Chip, is Gianni David Faruolo. Faruolo is charming in this role and it is heartwarming when he becomes a boy again. Jenelle Chu is enticing as the flirtatious Babette and Donna English is amusing and eccentric as Madame de la Grande Bouche. Honestly, the entire cast is incredible. Everyone embraces their role and give unforgettable performances.

With a show as large as this it takes a village to make it a success. There is a group of people who seem overlooked in reviews, and I would be remiss if I did not mention them in this review. The group I am referring to are the members of the ensemble. They are a group of people who play a bevy of roles throughout the show, and always add a ton of energy and zeal to the show. They provide splendid and dynamic performances in number such as “Be Our Guest,” “Gaston” and “Belle.” The members of the ensemble in Disney’s Beauty and the Beast are: Joe Bigelow, Monica Cioffi, Brittany Conigatti, Justin DeParis, Stephen DiBiase, Jennifer Evans, David Michael Garry, Lauren E. J. Hamilton, Leeds Hill, Brett Michael Lockley, Michael Milkanin, Corinne Munsch, Alexa Racioppi, Taylor Rosenberger, Molly Rushing, Bronwyn Tarboton, Matthew Vincent Taylor, and 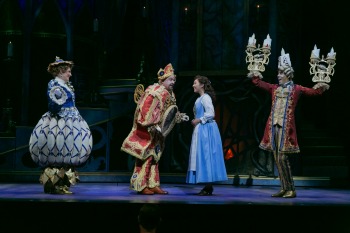 Lastly, I need to mention the Artistic Team who infused the show with all the magic one would expect from a Disney musical. Kelly James Tighe designed the grand set. Leon Dobkowski designed the colorful and exquisite costumes. Charlie Morrison’s Lighting Design is incredible and made the fight scene at the end shine. Matt Kraus serves as the Sound Designer. Michael Borth serves as the Musical Director.

Disney’s Beauty and the Beast runs at Paper Mill Playhouse through July 3, 2019.

For more information and tickets visit their website at papermill.org or call the box office at (973)376-4343.

Final Thought: Disney’s Beauty and the Beast at Paper Mill Playhouse is exceptional and a wonderful night of entertainment for the whole family. Everything in this show works together from the performances to the set to the lighting design to the choreography in order to create an enchanted musical experience. I have seen this musical several times over the years and this one is definitely the best production I have seen and one that I will remember for a long time to come.