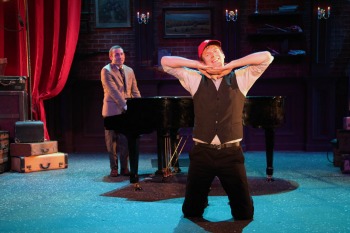 Currently onstage at Gretna Theatre is the regional premiere of the hilarious musical comedy Murder for Two. This is a funny and fast paced murder mystery that will keep audiences entertained and amused throughout the show. What is unique about this particular murder mystery is that two actors play all thirteen roles in the play in addition to playing the piano. Under the direction of J. Scott Lapp, Murder for Two keeps the show at a steady pace ensuring that the plot moves forward without being confusing. Murder for Two at Gretna Theatre is a hilarious show with energetic and amusing performances by the cast, making this a fun night of theatre.

Murder for Two premiered in 2011 with book and lyrics by Kellen Blair and the book and music by Joe Kinosian. The play is set in New England where mystery novelist, Arthur Whitey, is murdered. Quickly, Marcus, the detective, questions all the suspects and tries to determine who the actual murderer is. All this is done in a hilarious fashion with music and energetic performances. It is one of the more unique murder mysteries I have seen on stage and I thoroughly enjoyed it.

Playing the role of Marcus, the detective, is Eric Longo. Longo does a great job portraying Marcus, the character who is investigating the murder. He depicts his character as an insecure man who is trying to prove himself and show that he is up to the challenge of solving the murder. Playing a dozen suspects is Trevor Dorner. Dorner seamlessly glides from one character to another and he is very distinctive in his characterization of each individual he plays. This is something that is not easy to achieve and I applaud him for this. Both Longo and Dorner are masters of physical 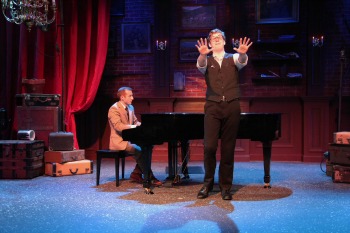 comedy. Dorner uses physicality to portray each suspect altering his facial expressions, stance and voice to make each character distinctive. Both Longo and Dorner are vocally talented, and they make the piano parts of the show look easy.

I also need to mention the artistic team. Kyle Dixon designed the wonderful set. The costumes were designed by Melanie Green.  The Lighting Designer is Diana Duecker and Johnathan Shuey is the Sound Designer. The entire team for Murder for Two makes great use of the space at Gretna Theatre.

Murder for Two runs at Gretna Theatre through Sunday, August 4, 2019. For more information and tickets please visit their website at www.gretnatheatre.org or call the box office at 717-964-3627.

Final Thought: Murder for Two at Gretna Theatre is a fun night at the theatre. It is an entertaining show filled with mystery and intrigue, energetic and amusing musical numbers, hilarity and a lively cast that is sure to delight audiences.