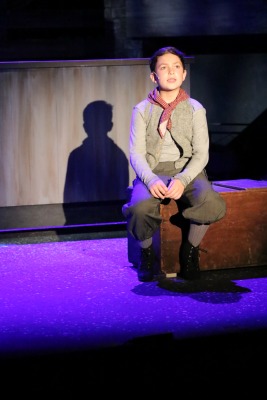 Oliver! is one of those shows I have fond memories of from seeing it as a child. It was one of the first shows I experienced that kindled my love for theatre. Therefore, it is also a show that I may be more critical about due to having seen it numerous times over the years. That being said, the production of Oliver!, under the direction of Peter Reynolds, at Gretna Theatre is magnificent. The show capably transports the audience to Dickens’ London and immerses them in the sights and themes of Victorian England. The detail of the set and the beautifully constructed costumes assist in taking the audience back to that time. The cast of the show from the children to the adults all give wonderful and strong performances. Gretna Theatre’s production of Oliver! is terrific, newcomers and lovers of this musical will heartily enjoy this well performed show.

Oliver! is a musical that premiered on the West End in 1960 and then had its Broadway premiere in 1963. The musical has music and lyrics by Lionel Bart. The musical is based on the novel, Oliver Twist, by Charles Dickens and tells the story of a young boy, Oliver, who started out life in a workhouse. He is eventually sold into apprenticeship to undertakers, the Sowerberrys. Oliver eventually escapes and enters a world full of pickpockets and deceit.  However, Oliver meets a few kind souls along the way. The show has many beloved songs such as “Where is Love,” “Food, Glorious Food” and “As Long as He Needs Me” that are beautifully performed in this production. As many times as I have seen Oliver!, this production felt as if there was enough subtle change to make it feel fresh.

The cast of Oliver! features a large number of children who portray individuals in desperate situations, their characters are a group of youngsters who are half-starving and have a rough life. I felt that the children featured in this show begin the show with great energy in the song “Food, Glorious Food.” Playing the role of Oliver Twist is Gavin Alvarez. Alvarez does a wonderful job of bringing Oliver’s innocence forth as well as his courage.  The innocence comes forth in the song, “Where is Love” and the courage is well represented in many scenes throughout the show, but especially in the scene in the first act in the Sowerberrys’ home. Cody Knable portrays the famous pickpocket, the Artful Dodger. Knable plays the Artful Dodger with confidence. His number, “Consider Yourself” is energetic with incredible choreography by Maggie Anderson. In the role of Fagin, a scoundrel who takes in street urchins 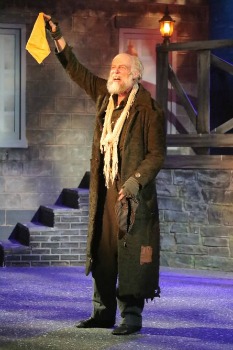 and teaches them to pick pockets, is Don Richard. Richard is flawless in this role. At times Richards’ Fagin comes across as roguish and there are moments when the audience gets a glimpse into his humanity.  His humanity comes across particularly strong in the song “Reviewing the Situation,” especially in the lyrics “What happens when I'm seventy? Must come a time - seventy! When you're old and it's cold and who cares if you live or you die, Your one consolation's the money you may have put by.” Richards’ Fagin is perfection in the way he creates a complex character with the infamous and greedy Fagin while still maintaining this character’s humanity. Jake Blouch captures the hard heartedness of the ominous Bill Sikes. He chills the spine as he spectacularly sings “My Name.” Dakota Mackey-McGee portrays Nancy, the abused girlfriend of Bill Sikes. Mackey-McGee is dynamite in this role. One of the things I respect most about her portrayal of Nancy is the way she brings to light that Nancy is abused by Sikes. As soon as Sikes enters the room her whole facial expression and demeanor changes. Mackey-McGee shows the heartbreaking motives of her character, she feels her life is the best she can get and she truly believes it’s what she deserves. Her rendition of “As Long as He Needs Me” is incredibly powerful and moves the audience.

With a cast this large it is hard to call out all of the impressive work of the cast, but there are a few more I wish to mention. The team of Bumble and Widow Corney, played by Salvatore Mirando and Gina Ricci, were a pleasure to watch and delivered on the humor in their song “I Shall Scream.” The team of the Sowerberrys played by Nathan Landis Funk and Meagan Mapson are hilarious with their comedic physicality and charming as the macabre undertakers.  Xhenet Capani portrays Bet, Nancy’s friend. Through Capani’s performance audiences can see how Bet tries to be empathetic and protect Nancy from Bill Sikes and his rage. In addition Capani along with Mackey-McGee give a wonderful performance in the song, “I’d Do Anything.” I also need to mention the ensemble and children’s ensemble who helped make this show a success especially in songs such as “Food, Glorious Food,” “Who Will Buy?” and “Consider Yourself.” Members of the Ensemble are: Caroline Gorland, Jackson Siegel, Jordan Lewis, Matthew Wilhelm, Nolen Petrosky, Tori Gaffey and Christian Melhuish. Members of the Children’s Ensemble are: Adele Ricci, Callaghan Petrosky, Carson Smith, Gabriel Hughes, John Laube, Jude Petersen, Malloree Marshall, Noah Woods, Oliver Hughes, Rome Mejias, Ryan Kimbark and Sadie Kosoff. 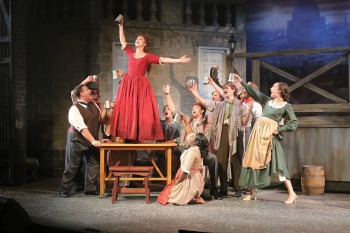 Lastly, I need to mention the artistic team that helps transport audiences to Victorian London. Laura Revelt designed the detailed set. Elizabeth Ennis designed the period appropriate costumes. Maggie Anderson is the Choreographer. Dan Burke is the Fight Choreographer. Johnathan Shuey is the Sound Designer and Shon Causer is the Lighting Designer. In addition, Scott Williams serves as the Music Conductor.

Oliver! runs at Gretna Theatre through July 21, 2019. For more information and tickets please visit their website at www.gretnatheatre.org or call the box office at 717-964-3627.

Final Thought: Oliver! at Gretna Theatre is an excellent production that will transport audiences to Dickens’ London. The cast of the show from the children to the adults all give wonderful and strong performances. Audiences will love Gretna Theatre’s rendition of this well-known and beloved classic musical.