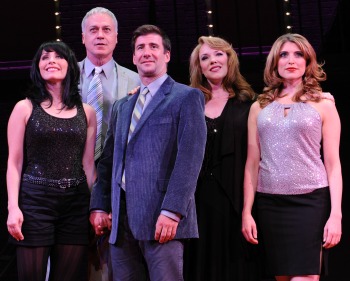 The latest show to grace the stage at Bucks County Playhouse is The World Goes ‘Round. This show is a celebration of the songs of John Kander and Frank Ebb. Kander and Ebb are a highly successful songwriting team. They are best known for their massive hit musicals, Cabaret and Chicago, as well as the song “New York, New York.” This tribute show showcases the songs of Kander and Ebb, and results in an pleasurable evening of entertainment.

The World Goes ‘Round opened in 1991 at Manhattan’s Off-Broadway Westside Theatre, and the show only lasted for 408 performances. Scott Ellis, Susan Stroman, and David Thompson conceived this revue show. This trio also collaborated on a few Kander and Ebb shows such as Steel Pier and the 1996 revival of Chicago.

The director for this current production at Bucks County Playhouse, Don Stephenson, has captured the spirit of Kander and Ebb in this show. The brilliance of their music comes through in the songs and shows energy, passion and humor in many of the songs performed throughout the evening. Emily Skinner shines in this show and her voice is magnificent. Her rendition 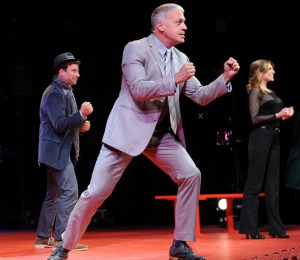 of the songs “Colored Lights” and “Isn’t This Better” should not be missed. David Josefsberg at times adds comicality to the show, especially in the song “Sara Lee.” In addition, his version of “Mr. Cellophane” is exceptional. Michelle Aravena radiates innocence in her song “Marry Me,” and she definitely shined in this number with the graceful dancing in this song. The duet between Janine DiVita and Emily Skinner, “The Grass is Always Greener,” is one will make you smile, and these two actors are wonderful in this number. Rounding out this cast is Tom Hewitt and his strong solo “Kiss of the Spider Women” left the audience breathless.

The showstopper in this show is a trio of songs, “We Can Make It,” “Maybe This Time,” and “Isn’t This Better.” These three songs evolve into a trio sung by Hewitt, DiVita, and Skinner. These songs are passionate and the best songs in the show. However, a few songs fell flat in the celebration of the songs of Kander and Ebb. The song “Me and My Baby” did not translate its humor well to the audience who seemed a little confused by the number. In addition, “All That Jazz” lacked the pizazz and energy that this song usually encompasses; the song seemed too innocent and was not the powerful number it was intended to be. That being said, this show is a grand celebration of the songs of Kander and Ebb, and should not be missed by anyone who is an admirer of their music. This show has audience members humming along during the show and on the way out the door.

The creative team also needs recognized for The World Goes ‘Round. Narelle Sissons is the scenic designer and Gregory A. Poplyk serves as the costume designer. In addition, Lorin Latarro is the choreographer and the music director is Phil Reno.

Final Thought: Go to Bucks County Playhouse and join this wonderful cast in a celebration of the music of Kander and Ebb in The World Goes ‘Round.

Originally appeared on the Broadway World Philadelphia website on July 1, 2013.