The Walnut Street Theatre Presents an Enchanting SHIPWRECKED: AN ENTERTAINMENT 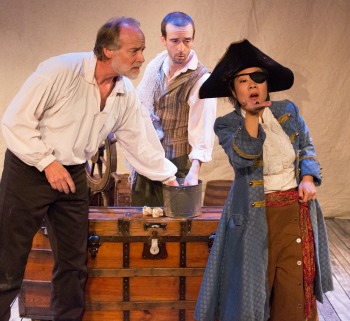 Walking into opening night of Shipwrecked: An Entertainment at the Walnut Street Theatre’s Independence Studio, I had no idea of what to expect, or that I would be completely mesmerized by the story. This play features storytelling at its best. The show is a fast-paced adventure, where one man with the assistance of two other performers tell a tale, and it asks that the audience use their imagination to go on this theatrical journey.  Shipwrecked is a highly entertaining and imaginative play, and it is a reminder that imagination can be theatre’s most powerful tool.

Shipwrecked: An Entertainment is based on the life story a man from the nineteenth century, Louis de Rougemont, who captured the world’s attention with his adventurous and fantastical tales. Award-winning playwright, Donald Margulies wrote this play, and he celebrates the importance of storytelling with this play. In the beginning of the play Louis de Rougemont (played by Greg Wood) comes onstage and explains, “I’m about to tell you a story. A fantastic and amazing story.” From that moment the audience is enthralled by a story about Louis and his adventures through the Australian outback, and how he encounters creatures like flying wombats and giant sea turtles. This show is simply entertaining, and is an example of storytelling at its best.

Director, Jesse Bernstein, has taken a tale from the nineteenth century and along with the cast creates an exceptional theatrical experience. 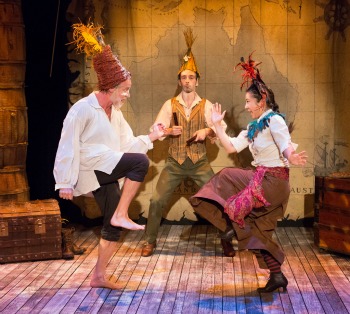 Greg Wood plays Louis de Rougemont, and from the moment he walks onto the stage he is full of passion and energy. He is animated and excellent in this role. Wood excels at storytelling and he brilliantly tells a story full of action and emotion. The audience can experience all Louis de Rougemont’s emotional journey told throughout the story reflected in Wood’s impassioned facial expression. There are two other performers in this show, Player 1 and Player 2, wonderfully played by David Bradley Johnson and Bi Jean Ngo. These two fine actors take on a number of roles ranging from a dog and a turtle to Louis’s mother and exotic islanders. Both Johnson and Ngo are full of vigor as they smoothly transition from one character to another. There is one scene, in particular, that I felt the entire cast really brought to life, and that is a scene depicting a fearsome thunderstorm. The sound effects are done onstage by both Johnsons and Ngo, and this scene was full of quick motion and loud rumbling and crashes to create thunder, it really felt as if the entire audience was in the storm within the story.

The set is full of items such as seashells, bells, steamer trunks and other ephemerae that is reminiscent of a ship and the period, and Glen Sears designed this set. Amanda Wolf designed the charming costumes. Shon Causer serves as the Lighting Designer and Zachary Beattie-Brown is the Sound Designer.

Final Thought: Shipwrecked: An Entertainment is a remarkable play that is wonderfully entertaining and features an incredibly talented cast of exceptional story tellers. This show will enthrall the audience and draw them into the action of the story, it is simply a superb night of entertainment.