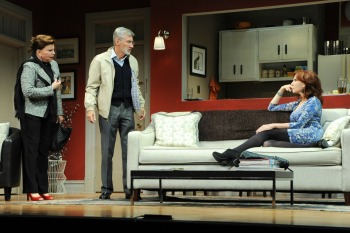 The Tale of the Allergist’s Wife tells the story of Marjorie Taub who lives on the upper west side of New York with her husband, Ira. Marjorie spends her time pursuing culture at lectures, museums and theatres. She is facing an epic mid-life crisis when a friend from her past visits her. This show stars Marsha Mason, David Garrison, Marilu Henner, Ryan Shams and Emily Jon Mitchell. The talented cast is reason enough to see this show, but the play also has brilliant dialogue that has audiences laughing aloud. 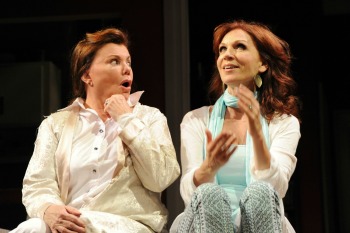 complicated. Marsha Mason plays the self-doubting character of Marjorie Taub. There are times that the character seems nonsensical, with her dialogue about the book she has written and Kafka. However, Mason adds so much passion into this character that she is likable and relatable. Mason’s performance in this play is brilliant. David Garrison plays the complicated character of Ira Taub, the husband of Marjorie. Ira is humorous, caring, warm and at times narcissistic. Garrison brings a balance to this role, and his performance as this complex character is superb. Marilu Henner portrays Marjorie’s childhood friend, Lee Green. Lee is adventurous and wants to live life to its full potential. Henner brings energy and brightness to this role. Mohammed, the doorman, is played by Ryan Shams. Shams adds physical comedy to his role, but also his character is insightful. Rounding out this cast is Emily Jon Mitchell. Mitchell portrays Marjorie’s mother, Frieda Tuchman, who is constantly complaining about her ailments. The evening I saw this play Mitchell was reading from the script because the actor who was to play Frieda became very ill, and Mitchell stepped in that day to play the role. However, Mitchell is animated and comical, and she was delightful in this role.

The Tale of the Allergist’s Wife is an insightful comedy, and it keeps audiences guessing what is going to happen next. It is a wonderful play with a strong cast, and should not be missed. The Tale of the Allergist’s Wife is at Bucks County Playhouse through September 1, 2013. For more information and tickets visit their website at www.bcptheater.org or call their box office at 215-862-2121.

Final Thought:  The Tale of the Allergist’s Wife is full of humor and the actors in this show are superb. Do not miss the opportunity to see this production.

Originally appeared on the Broadway World Philadelphia website on August 21, 2013.