THE STONE WITCH: A New Play Examines the Price of Creativity 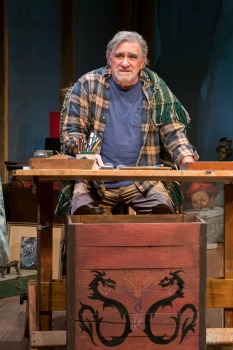 The Stone Witch a new play by Shem Bitterman, opened recently at the Westside Theatre. The play deftly examines the price people pay to share their creativity. It is a beautifully done piece in which the performances as well as the artistic aspects and direction are wonderfully done. The show is a three person play and I would say that the visual aspects practically add another character layer into this production. The Stone Witch is visually stunning as well as an inspiring and poignant new play.

Under the direction of Steve Zuckerman, The Stone Witch is about determination, losing one’s creative voice and the influence of a person’s imagination. The play stars Dan Lauria who plays Simon Grindberg, a well-known writer and illustrator who has not released a new work for twelve years and is under pressure to publish something soon. Simon’s editor, Clair Forlorni (Carolyn McCormick,) is becoming impatient while waiting for Grindberg’s next book. Clair finds a young artist, Peter Chandler (Rupak Ginn), who is not quite aware of his potential and hires him to assist Grindberg with completing his next book. Clair’s hope is that forcing these two talented artists together will inspire Grindberg to finally overcome his obstacles to write and illustrate his next book.

The cast of The Stone Witch is spectacular. They capably bring to the stage a multifaceted story about creativity, mentors and what happens to an artist’s creativity and their internal struggle with relevancy to their craft as they age. Dan Lauria is outstanding as Simon Grindberg. He plays what at first is seen as an eccentric character, however, throughout the play layers of his character are revealed. Lauria gives an animated performance that is full of emotion and exuberance. His line, “value yourself and value your time,” is one that has stayed in my mind ever since seeing the production. Carolyn McCormick plays Clair, Simon Grindberg’s editor. She gives a passionate performance as a person who is strong in her opinions. McCormick has an authoritative presence onstage, and the juxtaposition of her personality with the other characters adds a bit of levity when she appears onstage. Rounding out this cast is Rupak Ginn as the promising artist Peter Chandler. Peter is an eager character who is thrilled at the chance to learn from someone he has respected since childhood. Ginn gives an enthusiastic performance as his character evolves from a zealous student trying to find his voice to a successful artist. 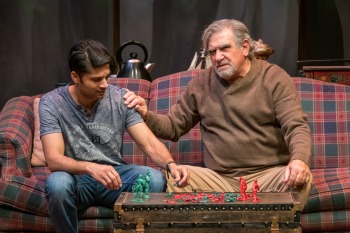 The set for The Stone Witch is remarkable. The set reflects Simon’s studio, which is located in a tranquil woodland setting. Throughout the show the audience will experience birds, deer and other wildlife seemingly come to life in the background. The artistic design is incredibly well done and the visuals are stunning and imaginative. Yael Pardess is the Scenic Designer and did the illustration art. Betsy Adams is the Lighting Designer and Christopher Cronin is the Sound Designer. Brad Peterson is the Projection Designer. Mimi Maxmen serves as the Costume Designer. Lastly. Roger Bellon composed the music for the production and he is also the Music Conductor.

For more information about The Stone Witch please visit their website at stonewitchplay.com. Tickets may be purchased by calling Telecharge at 212-239-6200, or by visiting Telecharge.com. 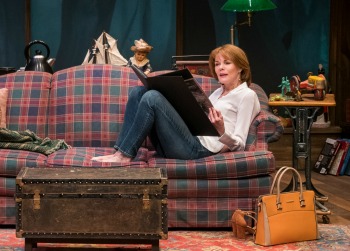 Final Thought: The Stone Witch is a show in which the plot is infused with layers that are slowly peeled back to reveal the underlying complexity of the characters and storyline. The set and visuals throughout the play are stunning. The performances by Dan Lauria, Rupak Ginn and Carolyn McCormick are powerful and captivating. The Stone Witch provides an evening well spent in the theatre.