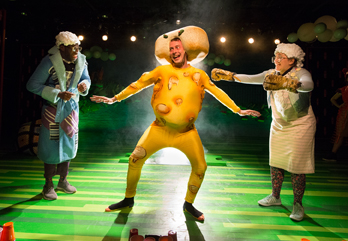 The cast of The Stinky Cheese Man bring this zany group of characters to life, and they are energetic and amusing to watch. This cast of five 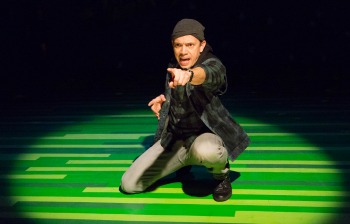 actors play multiple characters, and as much as I loved watching all the different stories, I will mention some of the highlights of the production. Doug Hara plays Jack (referencing the character from Jack and the Beanstalk) and he serves as the narrator. Initially he appears calm, and as the show unravels he becomes more and more frustrated with the characters lack of acknowledgement for his role as narrator. What I really appreciated about Hara is how he engages the audience from the time he appears onstage, and there is an amiability about him through which the audience immediately likes him. Rachel Camp gives an energetic performance, especially as she frantically struts around the stage as Chicken Licken. She is also hysterical as the Princess. Ashton Carter is animated throughout the show, and the highlights for me were his performances as the Prince and Cow Patty Boy. Leah Walton plays a variety of animal and human characters. She is hilarious as she strides around the stage as Foxy Loxy. Rounding out this incredible cast is Scott Sheppard. Sheppard is spirited as he jogs around the stage as the Stinky Cheese Man, and the night I was there the audience loved this part of the show.

What I loved about the Arden’s production of The Stinky Cheese Man is how they made the stage manager, Katie Ringwood, part of the production. Ringwood is referred to as “DJ Ringwood,” which allows the audience to see how she is controlling aspects of the show such as the sound and lights. The set, designed by, Brian Sidney Bembridge adds colorful elements to the show that children can relate to, almost giving the set a children’s craft project appeal. Jillian Keys designed the bright costumes. Maria Shaplin is the Lighting Designer and Michael Kiley serves as the Sound Designer and created the original music for the show.

The Stinky Cheese Man runs at the Arden Theatre through June 12, 2016. For more information and tickets visit their website at www.ardentheatre.org or call the box office at 215-922-1122.

Final Thought: The Stinky Cheese Man and Other Fairly Stupid Tales is a lot of fun and it is a show that children and adults will both enjoy. If you are familiar with the book then you will enjoy watching this colorful group of characters come to life on stage. But even if you have never heard of the book, you will still enjoy this silly and energetic show as the cast portrays several fractured fairy tales that are highly animated and entertaining.