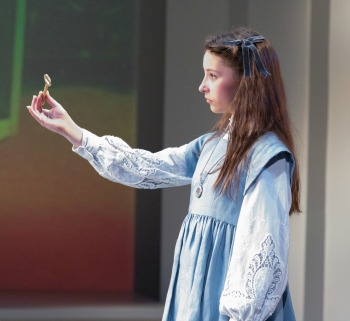 The Arden Theatre Company closes their 2016/17 season with a remarkable production of The Secret Garden. Viewing this show as an adult, I fell in love with the show all over again, as I did in the 1990s with the original Broadway production. The Arden’s production is creative and the cast is exquisite, it is an exceptional production that brings to life this well-known children’s story. There is a reason that the Arden is known for productions that are innovative, and The Secret Garden, under the direction of Terrence J. Nolen, is a perfect example of how the Arden brings good stories to life.

The Secret Garden is based on Frances Hodgson Burnett’s 1911 novel of the same name. It tells the story of a girl, Mary Lennox whose family died in India due to a cholera epidemic. She is sent to live with her uncle, Archibald Craven, at his manor house in Yorkshire, England. This household has a dark cloud over it, and Mary is surrounded by many people who are dealing with their own “plagues.” However, Mary manages to find a few friends within the household who help her gain faith in herself and grow. She is able to find the fortitude within herself to help others around her realize their own inner strength to fight off their own personal afflictions.

The production of The Secret Garden at the Arden was conceived by Terrence J. Nolen and Jorge Cousineau. What they created is a visually striking production that is unlike anything I have seen before. I applaud both Nolen and Cousineau who have created a production that will take the audience into young Mary’s world, and see things as she does. Playing the role of Mary Lennox is Bailey Ryon. Ryon is exceptional as young Mary, and she conveys the roller coaster of emotions that this role demands with ease. She gives a brilliant performance as she evolves from a girl who is scared and alone in the world to one who finds a place that she may come to call home. In addition, she is vocally strong, in 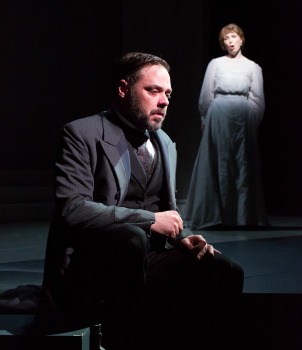 particular in the song “The Girl I Mean to be.” Jeffrey Coon plays Archibald Craven, Mary’s brooding uncle who is mourning the death of his wife, Lily. Coon provides a brilliantly haunting performance in which he conveys Archibald’s gloomy nature with a depth, so that the audience can see immediately the personal demons this character is facing. Additionally, Coon fiercely performs “A Bit of Earth,” that is both emotional and vocally powerful. Playing Lily, Archibald’s deceased wife who haunts him, is Elisa Matthews. Matthews appears almost angelic throughout the show, and her voice is stunning, particularly in “How Could I Ever Know.” Her scenes in which she is watching over her son, Colin, show the love and compassion a mother holds for her child. Hudson Orfe, portrays Colin Craven. Orfe initially instills Colin with an air of entitlement, but as the audience gains an understanding of this character it is revealed that this is due to his isolation, and underneath the surface he is a boy who is overflowing with hope and kindness. In addition, Orfe and Ryon have great chemistry onstage, and there scenes together radiate with a sibling-like quality. Jim Hogan plays Dr. Neville Craven, Archibald’s brother. Hogan was extraordinary as this complex character who initially appears to be a generous Good Samaritan, but then reveals the complexity of Neville and the perception towards his character shifts as his resentments begin to appear. Additionally, the duet between Coon and Hogan, “Lily’s Eyes,” is one of the strongest of the production. Alex Keiper shines as Martha, the young chambermaid, who helps guide Mary throughout the story. Keiper is full of life, and she imbues Martha with a kindness and exuberance for life. Her rendition of “Hold On” is delivered with love and fervor, and is emotionally touching. One last person I need to mention is Steve Pacek who portrays Dickon, Martha’s brother who looks after the plants and animals on the grounds of the manor. Pacek is charming in this role as he is energetic and has a lively personality. His song, “Wick” is full of spirit and enthusiasm. 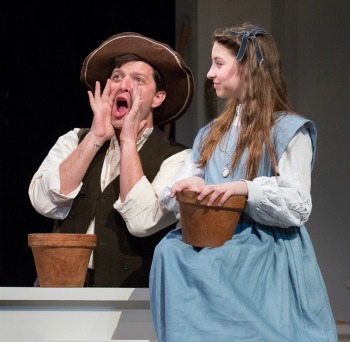 I also need to mention the Scenic and Video Design by Jorge Cousineau. It added an original visual element to the show that provided a dollhouse like quality and assisted in bringing this story to life. Olivera Gajic designed the beautiful period appropriate costumes. Solomon Weisbard is the Lighting Designer and Daniel Perelstein is the Sound Designer. Niki Cousineau is the Choreographer. The new orchestrations for this show are by Larry Lees. In addition, Ryan Touhey serves as the Music Director.

The Secret Garden runs at the Arden Theatre Company through June 19, 2016. For more information and tickets visit their website at www.ardentheatre.org or call the box office at 215-922-1122.

Final Thought: The Secret Garden at Arden Theatre Company brings to life this much loved children’s story. This production, through the use of imaginative set design and a spectacular cast, draws audiences into this heart-wrenching story.