The ODD COUPLE at EPAC is a Fun Night of Theatre 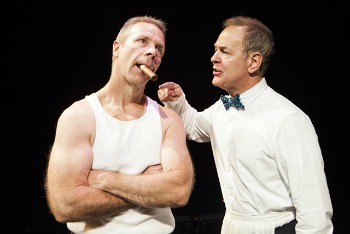 Chances are that most people are familiar with the setup behind Neil Simon’s 1965 play, The Odd Couple. This play features two main characters, the uptight and neat, Felix Ungar, and the sloppy and tactless, Oscar Madison. These two polar opposites end up becoming roommates and the comedy commences. Even though this play is one that many people are acquainted with, the production at Ephrata Performing Arts Center is a strong production that provides an evening full of laughter. The Odd Couple at Ephrata Performing Arts Center is an American theatre classic done well, which makes for an entertaining evening of fun and mirth.

The Odd Couple is one of Neil Simon’s most produced plays. It premiered on Broadway in 1965, starring Walter Matthau and Art Carney. Since its premiere in 1965, it has had several stage revivals, a 1968 film starring Walter Matthau and Jack Lemon, a 1970s television sitcom and a reboot of the sitcom that began in February of 2015. Even though this play was written in the 1960s, and maintains references from the 60s, the material still retains its comical edge and provides for an entertaining show in the present day. There are punchy one-liners, and this idea of the chaos that comes with living with a very unmatched roommate is still relevant. The plot of this play is about two men, Oscar and Felix, who are old friends, but have very different world views and life styles. Oscar and Felix are both separated from their wives, and they are trying to save money, so Oscar offers Felix the opportunity to move into his 8-room apartment as Felix has no place to go after his separation. The result of The Odd Couple at EPAC is a funny and enjoyable production. 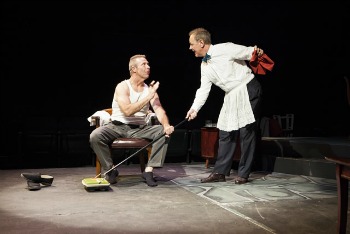 appealing and relevant many years after it first appeared on Broadway. In addition, the cast in the production at EPAC are charming, and give performances that will delight audiences. Playing the roles of Oscar Madison and Felix Ungar are Bob Checchia and Kevin Fisher. These two are great fun to watch and they have a great dynamic onstage. Checchia’s Oscar is perfectly brash. Fisher flawlessly plays the neurotic Felix, and he manages to navigate this character’s nuances expertly. Both Checchia and Fisher genuinely look like they are enjoying their experience onstage together, and provide a feeling akin to a fraternal bond between these two characters. The poker boys, Speed, Murray, Roy and Vinnie, are all excellently cast and play this motley band of poker players. This group played by Herbert Stump, Bruce Weaver, John Kleimo and Rich Mehrenberg are all outstanding. Each of these fine actors provide moments of true hilarity, which add to the magnificence of this production. Rounding out this cast are the effervescent Pigeon sisters, Gwendolyn and Cecily, played by Amy Carter and Heidi Carletti. Carter and Carletti add a brightness to the scenes they appear in, and they have an infectious energy that make their scenes hilarious.

Kayla Arrell designed the wonderful set that plays a role as well as it transforms from an apartment in a disheveled mess to a neat as a pin abode. Veronica Craig designed the pleasing costumes; I particularly enjoyed the costumes of the Pigeon sister, which seemed to fit their personalities perfectly. Mike Wiltraut serves as the Lighting Designer and Steve Schelling is the Technical Director.

The Odd Couple runs at Ephrata Performing Arts Center through June 27, 2015. For more information and tickets visit their website at www.ephrataperformingartscenter.com or call the box office at 717-733-7966.

Final Thought: The Odd Couple at Ephrata Performing Arts Center is a hilarious comedy done well. This production at EPAC is a reminder of why this show is still appealing, and this cast is uproariously entertaining to watch onstage.