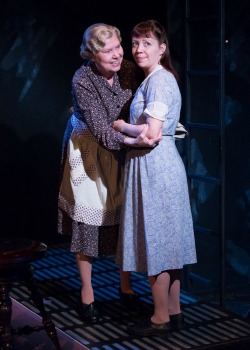 The classic Tennessee Williams play The Glass Menagerie is a show that paints a picture from personal truth and the emotional watercolors of memory. It is a beautifully written play with affecting dialog and themes. This show draws the audience into the story as soon as Tom, the narrator, steps on the stage to explain what the audience is about to see is a “memory play,” where each scene is a crucial memory in Tom’s life. Tom discloses, “I give you truth in the pleasant disguise of illusion.” The production of The Glass Menagerie at Act II Playhouse, under the direction of James J. Christy, is seamless and it captures the essence of Williams’s work with graceful precision.

The Glass Menagerie chronicles a portion of the Wingfield family life during the late 1930s. The father of the family abandoned them many years ago. The mother, Amanda, who was once a southern belle, wants her daughter, Laura, to be able to experience some of the splendor she had lost from her youth. The narrator of the story is Tom, Amanda’s son and Laura’s brother. Tom has the financial responsibility of supporting his family, and is frustrated with his situation. The production depicts a story of tragedy and desperation as well as the glimmer of hopes and dreams. The Glass Menagerie premiered in 1944 in Chicago and opened on Broadway on March 31, 1945. This play helped Williams rise to be one of America’s greatest playwrights. This show has strong biographical elements that partially reflect some of the struggles in Williams’s life. The storytelling in The Glass Menagerie is elegant, and the production at Act II Playhouse enchants and captivates the audience, and portrays this story with first-class performances.

Before I delve into the magnificent performances in The Glass Menagerie, I need to talk about the creative team for this production, because their attention to detail in this show is stunning. From the moment I walked into the theatre, I was drawn in by the amazing set, which is designed by Daniel Boylen. The lighting design, by James Leitner, engages the flow and feel of memory throughout the show. Frankie Fehr designed the exquisite costumes. Additionally, Amanda’s Cotillion dress is well-crafted and just looking at the outfit audiences can see the trail of memory associated with this gown. The sound design by John Stovicek invokes the idea of memory through the use of music throughout the production.

Equally outstanding are the performances in The Glass Menagerie, which are superb. Carla Belver has the difficult task of playing Amanda, a 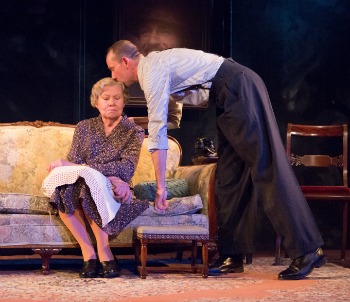 faded Southern belle whose husband left her, and revels in the memory of her bygone glory days. Amanda is at one moment the embodiment of Southern charm and in the next is forced to engage the harsh reality of her circumstances and the emotional battle she is fighting with the disappointment in her life and the prospects for her children. Belver is a master of this role, she perfectly captures Amanda’s emotional turmoil. Playing the role of Tom, who also serves as the narrator is Charlie DelMarcelle. Tom is a character who is passionate and has a strong temper; he struggles with keeping his emotions bottled up and thus further feeds his inner tumult and anger. He cares deeply for his sister, Laura, and wishes the best for her, although he is plagued by inner turmoil and struggles with his own personal demons and eventually reaches a breaking point. DelMarcelle brings all these different aspects of Tom to light, as well as he smoothly shifts from the narrator to Tom with ease. In the role of the painfully shy Laura is Amanda Schoonover. Schoonover successfully depicts to the audience Laura’s inner anguish. DelMarcelle and Schoonover have a wonderful chemistry onstage, which accentuates the tender bond between these two characters on stage and further draws the audience into the deep emotional conflicts portrayed in this show. Rounding out this cast is Sean Bradley who plays Jim O’Conner, the charming Gentleman Caller. Bradley brings a brightness to this part, as well as gives a caring aspect to his character, which provides for a very human connection between Jim and Laura.

The Glass Menagerie runs at Act II Playhouse through November 23, 2014. For more information and tickets visit their website at www.act2.org or call the box office at (215) 654-0200.

Final Thought: Act II Playhouse’s production of The Glass Menagerie is compassionate and illuminating. Everything about this production works together from the performances to the set, and it captures the essence of Williams’s work brilliantly.  Do not miss this honest and intelligent production at Act II Playhouse.