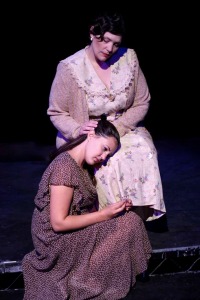 Truthful, beautiful and heartbreaking – those are the words that came to mind as I watched The Glass Menagerie on Ephrata Performing Arts Center’s (EPAC) stage this weekend. This play written by Tennessee Williams has beautiful and poetic language that captivates the audience and pulls at the heartstrings. EPAC’s production of this play is presented in a heart-felt and intelligent way that well represents Williams’s work.

The Glass Menagerie tells the story of a family during the late 1930s in Saint Louis. The father of the family has abandoned them, and the mother, Amanda, who was once a southern belle, wants the same for her daughter, Laura. The narrator of the story is Tom, Amanda’s son and Laura’s younger brother. Tom has the financial responsibility of supporting his family, and is frustrated with his situation. The play depicts a story of tragedy, desperation as well as hopes and dreams. If you have never seen a production of The Glass Menagerie, this is an exceptional production, and one of the best I have seen.

The cast of The Glass Menagerie are all brilliant actors. Timothy Riggs plays Tom Wingfield, the provider for 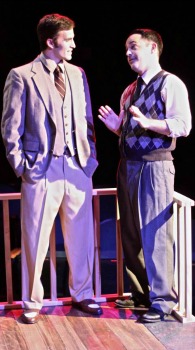 the family who adds sarcasm to the play with his dialogue. Riggs has the responsibility of delivering one of the most hauntingly beautiful pieces of writing to begin any play. He does this with grace and precision. Karyn Reppert portrays Amanda Wingfield, the mother and faded Southern belle. She animatedly shows the characters range of emotions from angry and desperate to charming. Reppert turns on and off this character’s emotions and she does this with great care. Megan Baum, who is exquisite in this role, plays the sister, Laura.  Laura has an inferiority complex (as this is identified within the play) due to a childhood illness that left her with a limp. She is sad and innocent, and looks up to her younger brother. Baum adds a stubbornness and hopefulness to this role, which adds to the complexity of this innocent character. Rounding out this fantastic cast is Brian Viera who plays Jim O’Conner. O’Conner is compassionate, and wants to help Laura overcome her inferiority complex. Viera gives a notable performance, and his scene with Laura is outstanding.

The set for The Glass Menagerie also adds to the haunting feel of the play. The set has depth, and the details showing the abandoned house are amazing. Jordan Janota deserves recognition for this set. In addition, Rich Repkoe directed this fine production.  In addition, Veronica Craig serves as the costume designer.

The Glass Menagerie runs at EPAC through September 21, 2013. For ticket and more information visit their website at www.ephrataperformingartscenter.com or call the box office at (717) 733-7966.

Final Thought: EPAC’s production of The Glass Menagerie is beautiful and haunting. The cast is stellar, and makes this play an exceptional production.