The Fulton’s MARY POPPINS is a Heartwarming Delight 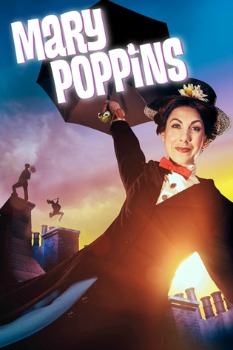 I am one of the few people who cringe at the thought of my favorite Disney movies being turned into stage musicals. Every time I see the stage version, it seems to lose some of the essence I adored as a child in the movie. Then along came Mary Poppins. This show captures the personalities of the major characters, but makes it unique enough that I am not watching a recreation of the movie. In addition, the musical incorporates characters from the books that were not in the 1964 Disney movie such as Robertson Ay, the house helper. I loved Mary Poppins when I saw it on Broadway, and the Fulton Theatre’s production of the show is equally charming.

Mary Poppins is directed and choreographed by Marc Robin, who does a wonderful job recreating the magic that is expected from Mary Poppins. In addition, his choreography is outstanding. Katie Sina plays Mary Poppins, and she is perfect in every way for this role. She is sweet and kind, with a hint of sternness and eccentricity. Sina’s performance is outstanding, and she brings the magic of Mary Poppins to life. Brian Shepard portrays Bert, Mary Poppins’s sidekick and friend. Shepard makes a perfect Bert, and he shines in the number “Step in Time” with the brilliant choreography. The role of Mrs. Winifred Banks is played by Abbey Mueller. Mueller brings a sensitivity to this character, and her song “Being Mrs. Banks” is strong and emotional. Curt Dale Clark portrays Mr. George Banks, and he is seamless as the stoic father. Clark brings to life the transformation of George, from a stern and cold father figure to a warm and caring family man who places his family above his work. George Bank’s metamorphosis pulls at the heartstrings and there were a few tears shed from the people around me the night I saw the show. Jane and Michael Banks are played by Lauren Elledge and Austin Nedrow. Both Elledge and Nedrow are enthusiastic and joyful in their portrayal of the high-spirited Banks children.

There are a number of other performances that were outstanding in this production that need mentioning. Susan Cella cheerfully plays Mrs. Brill, the cook and housekeeper, and she adds wit and liveliness to this role. Andrew Kindig plays Robertson Ay. Kindig is animated and he has audiences laughing throughout the show with his antics. Q. Smith plays Miss Andrew, Mr. Banks’s childhood nanny, who is cold and harsh. Smith is powerful in her performance and her vocals. Rounding out this outstanding cast is Charis Leos as the Bird Woman. It is always a pleasure to see Leos on the Fulton’s stage and her rendition of “Feed the Birds” is full of heart and compassion.

Mary Poppins runs at the Fulton Theatre through December 29, 2013. For more information and tickets visit their website at www.thefulton.org or call the box office at 717-397-7425.

Final Thought:  The Fulton Theatre’s Mary Poppins is an enchanting show that is full of high energy dance numbers, outstanding performers, and colorful costumes. It is a show that adults and children will enjoy.