The Fulton Theatre’s ALADDIN is a Magical Family Musical 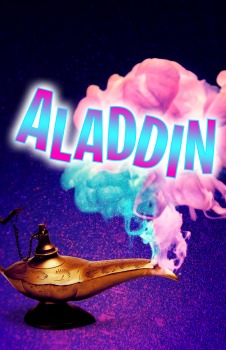 The latest show in the Fulton’s Family Series to appear on stage is Aladdin. This musical is based on the ancient Middle-Eastern Folk Talk of the same name and is one of the stories in The Book of One Thousand and One Nights (Arabian Nights). The book, lyrics and music of this version of Aladdin are by Marc Robin and Curt Dale Clark. This show is interactive and energetic, and entertaining for the entire family. Robin and Clark’s Aladdin will impress audiences of all ages with its treasure trove of songs, comedy, and magic.

In Aladdin audiences encounter Aladdin and the Genie, as well Princess Zenovia and the evil wizard, Malachi. This tale takes audiences on a fun filled adventure with Aladdin.  In a classic struggle of good versus evil, the audiences see Aladdin struggle with choices that he will ultimately decide upon with the help of the Genie. The Fulton’s Aladdin is a fun and energetic show, that also includes interaction with the audience.

Michael J. Austin plays the title role of Aladdin. He is energetic in this role, and brings the character of Aladdin to life. His song, “Magic Carpet Ride” is one of my favorite songs in the entire show. Cary Michelle Miller plays Cashew, the chimpanzee companion of Princess Zenovia and Aladdin. Miller brings life to Cashew, and she is fun and animated in this role. Brittany Leffler portrays the Genie. Leffler has a bold presence in this role and has a powerful voice. After seeing Leffler in this role, I cannot imagine anyone else playing the Genie. Marisa Rivera plays Princess Zenovia, the innocent princess with strong opinions. Rivera captivates the audience from the start of the show with the song, “Somewhere, Somehow, Soon.” Steve Czarnecki portrays the evil wizard, Malachi. Czarnecki successfully illustrates the charismatically evil villain. The entire cast brings the characters of Aladdin to life, and audience members of all ages will enjoy this fantastic show.

Additional members of the creative team for this show also need recognized.  Andrew Kindig directed this excellent production of Aladdin. The costume, hair and makeup designer is Anthony Lascoskie, Jr.  In addition, Aaron McAllister serves as the musical director.

Final Thought: Aladdin is a fun and energetic show that is enjoyable for the entire family.

Originally appeared on the Fig Lancaster website on June 21, 2013.