The Fulton Theatre Presents a Majestic AND THEN THERE WERE NONE 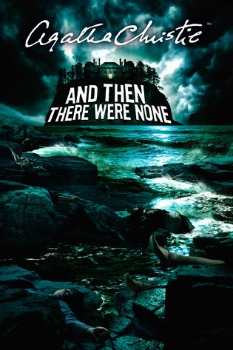 The Fulton Theatre begins 2015 with a brilliant production of Agatha Christie’s And Then There Were None. This show about ten strangers lured to a remote island by a mysterious host for a getaway weekend, but what they encounter is mysterious deaths as the guests are killed one by one. The production of And Then There Were None is the Fulton Theatre at their best. This show has a great story, a wonderful cast and a dynamic set; all of this works to tell the story of Christie’s masterpiece.

And Then There Were None highlights director Marc Robin at his best, he truly got to the heart of the story, and this production definitely shows Mr. Robin’s love of the play. The cast of the show is full of exceptional actors who all seem to have as much passion for this play as Robin. Due to the size of the cast and the mysterious aspect of the show I cannot write about them all individually, but I need to mention a few standout performances. I need to reiterate again that the entire cast of this show is strong and to be commended for their performances. Katie Sina plays the likable Vera Claythorne. Sina is perfectly elegant in this role. Peter Matthew Smith portrays Captain Philip Lombard. I enjoyed the dialogue between Sina and Smith, as they brought a likableness to both their characters.  In the role of William Blore, the detective, is David Girolmo. It is always a pleasure seeing Girolmo on the Fulton’s stage, and he has a strong presence in this role. In addition, Girolmo adds bits of humor in this mysterious play. Michael Iannucci plays the guilt-ridden Dr. Armstrong. Iannucci did a fantastic job keeping the audience on the edge of their seats as they tried to figure out who committed the murders. Lastly, I need to mention Paul L. Nolan who played Sir Lawrence Wargrave, a judge. Nolan gave a fine performance and was very convincing as the retired judge.

The beauty of attending the opening night performance at the Fulton is that Marc Robin, Artistic Director, gave opening remarks before the show started. He explained to the audience that scenic designer, William Mohney, and Props Designer, Katelin Walsko, “went above and beyond” to make this show outstanding. I could not agree more, the set for this show is grand and beautiful, and seeing this set is worth the price of a ticket. In addition, the props were perfect and added suspense to this show. Everything about And Then There Were None worked for me and made it a show that kept me on the edge of my seat. And Then There Were None is one of my top three favorite shows I have seen over the last few years at the Fulton Theatre. This is one play at the Fulton that should not be missed.

And Then There Were None runs at the Fulton Theatre through February 15, 2015. For more information and tickets visit their website at www.thefulton.org or call the box office at 717-397-7425.