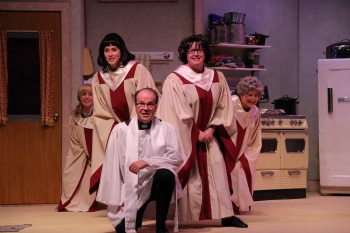 The Church Basement Ladies is an ideal show for the fall, it serves as a comforting show for the audience’s enjoyment. This installment of the series is A Mighty Fortress is Our Basement, and it is the fourth show in this series. However, one does not need to have seen any of the other productions in order to understand the show. This was my first experience seeing any of the shows in The Church Basement Ladies series and I did not have a hard time following the story. This is simply a show for people’s entertainment, it is a great show just to sit back, relax, and be amused. It is a fast paced show, and the production at Dutch Apple Dinner Theatre will have audiences laughing from beginning to end of the show.

The Church Basement Ladies is a musical comedy that focuses on a group of ladies who help out in the church, particularly cooking meals for church functions in the church basement. The musical takes place in a rural Minnesota Lutheran church in the 1960s. The story of this installment of The Church Basement Ladies: A Mighty Fortress is Our Basement revolves around four women, the youngest is getting ready for her confirmation, and they are also preparing for their pastor’s marriage to a woman who is Catholic (this is met with much judgment and gossip by the older women.) The musical is inspired by the book Growing Up Lutheran, by Janet Letnes Martin and Suzann Nelson. The music and lyrics are by Drew Jansen, and written by Gretna Grosch. Additionally, director Curt Wollan, who according to a press release, “is the Artistic Director of the Plymouth Playhouse in Minneapolis, will return to his role as director. His company, Troupe America Inc., has produced all five installments of Church Basement Ladies there.”

The Church Basement Ladies: A Mighty Fortress is Our Basement is a show that only requires audiences to have a good time and enjoy. The night I was there the people in the audience were enjoying the show immensely, and laughing raucously throughout the show. Sarah Cammarata plays Beverly, the young woman who is about to take her confirmation. Cammarata embraces the innocence and sweetness of her character. Alison Nusbaum plays Karin, Beverely’s mother who is trying to come to terms with the reality that her daughter is growing up. There is a song, “Growing Up, Letting Go,” that is a tender moment between this mother and daughter. In addition, Nusbaum is at her comedic best when she is frantic and crazed in a particular scene when she is mocking her mother-in-law. Shannon Connolly portrays Mavis, who is feisty, comical and likable. I thought that Connolly was strong throughout the show, however, there is a song, “Born to Farm.” In this number, as silly as the lyrics are, the passion that comes from Connolly really makes this song work. Diana Wilde plays Vivian, who is the character that is having a hard time accepting that times are changing, and is absolutely horrified her pastor is marrying someone who is Catholic. Wilde keeps audiences laughing with her stunts, but she is amusing in her song, “Vivian Snustad: The Pickle Queen.”  Rounding out this cast is Greg Elden as Pastor. Elden is perfectly cast for this role as he gives the Pastor a patient and calm demeanor.

The Church Basement Ladies: A Mighty Fortress is Our Basement runs at Dutch Apple Dinner Theatre through November 7, 2015. For more information and tickets visit their website at www.dutchapple.com or call the box office at 717-898-1900. 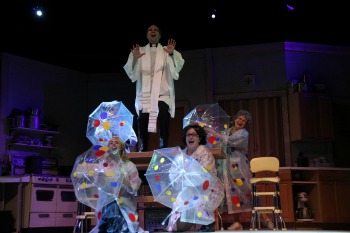 Final Thought: The Church Basement Ladies: A Mighty Fortress is Our Basement is one of those musicals that expect audience to just unwind and be amused for the evening. The cast of characters in this show are charming, and it provides for an enjoyable evening of entertainment.