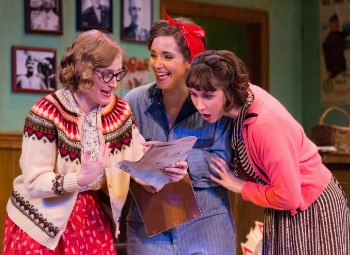 THE CAROLS, the latest show onstage at 1812 Productions, is a delightful show that takes audiences back to the year 1944 in a small New Jersey town. Artistic Director, Jennifer Childs, wrote and directed this original play that is a heartfelt reminder of the importance of family and kindness. This production is an emotional and heartwarming story, and the writing and performances are full of warmth and sentiment. THE CAROLS at 1812 Productions is witty and truly a delightful production.

THE CAROLS takes a water-colored look at past Christmases. The play is about three sisters and their remembrance of a Christmas in 1944 in Picatinny, New Jersey. Each sister has a unique personality, Silvia is the erudite and humanitarian sister, Rose is the romantic sister who is looking for love and Lily, who also serves as the narrator, is the caring and down to earth sister. All three sisters are looking to put on the annual tradition of A CHRISTMAS CAROL pageant at the local VFW. They are struggling to decide whether to go on with the production since they are in the midst of World War II and most of the town’s male population, those who would normally take part in the pageant, are off fighting in the war. This particular VFW provides a colorful assortment of characters who assist in this year’s production of A CHRISMAS CAROL.

Mary Martello plays Miss Betty, the manager of the VFW, who is a constant presence at the club. Martello is spectacular in this role as the 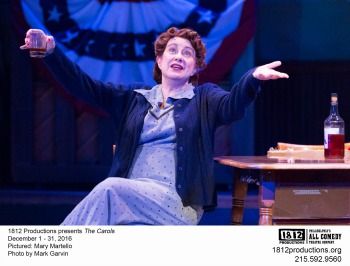 curmudgeonly caretaker who deep down hides a tender heart. Martello’s facial expressions are delightfully expressive and perfectly delivered throughout the show, especially in “Calypso Christmas Carol.” Rachel Camp plays Lily, the logical sister. Camp reminds the audience of the sentimentality that the holidays bring out and she is ideal as the heartfelt narrator. Camp takes the audience on a journey and Camp’s welcoming personality puts the audience at ease. In addition, her duet with Martello, “I Say Humbug,” is vocally strong and my favorite number of the show. Emily Kleimo plays Silvia, one of the three sisters, and a person who sees Eleanor Roosevelt as a role model. Kleimo brings out this character’s kindness, and convincingly portrays this bright eyed optimist. Caroline Dooner plays Rose, the sister who is dying to go on a date. Dooner adds a lot of humor to the show. Also, her duet with Kleimo, “Soon,” is a heartfelt and sincere number. Anthony Lawton portrays Mel, a comedian who is looking for his next gig. Lawton is full of pizazz, and his animated retelling of A CHRISMAS CAROL is hysterical. In addition, the tap number with Camp, “What’s Buzzin’ Cousin,” is full of energy. Rounding out this incredible cast is T.J. Harris who plays Teddy, the pianist who is all but mute during the show. Harris’s piano playing skills add to the nostalgia of the play and he adds physical humor as an almost invisible character while maintaining his station at the piano. 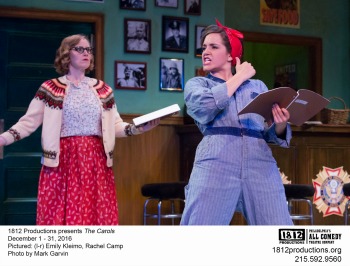 The set for this show, designed by Lance Kniskern, infuses the audience with holiday nostalgia, as the set is reminiscent of a VFW during World War II. It is complete with a Christmas tree and posters regarding doing your part for the war effort. Janus Stefanowicz designed the costumes that reflect each character’s personality. Lighting Design is by Drew Billiau and Christopher Colucci serves as the Sound Designer. In addition, Karen Getz provided outstanding choreography for this show.