The Book of Mormon is an Energetic and Hilarious Musical 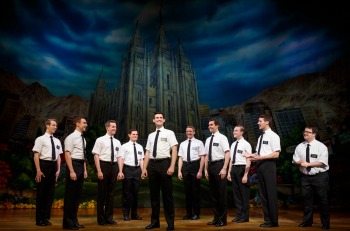 This Thanksgiving weekend The Book of Mormon is onstage at Hershey Theatre. The show, winner of several Tony awards, is an equal-opportunity offender. Although this show may not be for everyone, the night I was in attendance it had the audience laughing hysterically. The show is full of humor, vulgarities, heart, and it is a fine musical that is wildly entertaining. The Book of Mormon tour currently at the Hershey Theatre has an incredible cast that will have audiences laughing throughout the show.

The Book of Mormon, under the direction of Casey Nicholaw and Trey Parker, is a satirical musical that does poke fun at the Church of Latter Day Saints. However, if you are concerned that the show is anti-religion, it is worth a second look at the message it is sending. The show is raunchy, but the message the show promotes is about reaching one another as humans through storytelling. The book, music and lyrics are by Trey Parker, Robert Lopez, and Matt Stone. The show won nine Tony awards, including one for Best Musical. The story of this show is about two young Mormon missionaries, Elder Price and Elder Cunningham, who are sent to Uganda to try to convert the residents of a Ugandan village. Once they arrive they realized this village is plagued by poverty, AIDS and violence, and that the villagers have no interest in the Mormon religion as they are too busy just trying to survive. It is up to Elder Cunningham and Elder Price to convince the villagers that Mormonism will benefit their lives.

The Book of Mormon is an ensemble musical, in which the entire cast makes this production shine. The three leads in this show Elder Price,

Elder Cunningham and Nabulungi are all excellent. Playing the role of the narcissistic Elder Price is Gabe Gibbs. Gibbs gives energetic performances as this over the top character. His vocals in the song, “I Believe” are strong and he is full of conviction in this number. Playing the insecure and peculiar Elder Cunningham is Cody Jamison Strand. Strand is wonderfully hilarious in this role, and he is fabulous in the number “Man Up” at the end of act one. In addition, Gibbs and Strand have great chemistry onstage, and their song, “You and Me (But Mostly Me)” is well done. Kristen Jeter plays Nabulungi, the charming and spirited daughter of the village leader. Jeter steals the show with her powerful vocals in “Sal Tlay Ka Siti.” The entire cast of this show provide phenomenal performances. The show begins strong with the dynamic number “Hello.” Another stand out song in this show is “Turn it Off,” and this number also includes incredible choreography by Casey Nicholaw. One last song I want to mention is “Hasa Diga Eebowai,” this is another magnificent number in The Book of Mormon. This show isn’t a musical for children — or easily offended adults — but for those who enjoy an edgier show and are willing to hear somewhat vulgar lyrics, they will enjoy an evening full of uproariously humorous entertainment.

The Book of Mormon is at the Hershey Theatre through November 27, 2016. For more information and tickets please visit their website at www.hersheytheatre.com or call their box office at 717-534-3405.

Final Thought: The Book of Mormon is an incredible show with an exceptional cast. This show is a zealous and outrageous comedy, and is a creative production.  If you are comfortable with adult themes and have a chance, go see the touring company of The Book of Mormon.