The Arden’s STICK FLY is a Lively Stage Experience 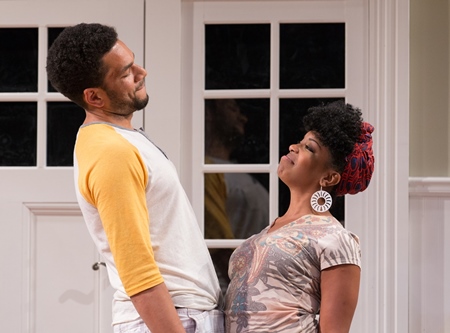 The Arden Theatre is known for doing shows that make audiences think well after the show is over. Their latest production Stick Fly is no exception to this. This play will make you laugh, tear up with emotion, and encourage a discussion after the play is over. This, in my opinion, is a perfect theatrical experience. The characters in Stick Fly discuss issues such as class and race, but there are also plenty of laughs throughout the play.

STICK FLY tells the story of a wealthy African-American family, who spend a weekend in Martha’s Vineyard. As Joe LaVay, the father, explains in the beginning of the play, “We [LaVay’s ancestors] were the first blacks to own land anywhere on the Vineyard.” Throughout the weekend family conflicts arise that lead to intense emotional situations and a lighthearted look at family dynamics. The family and their guests explore topics such as race, class, and responsibility. What results from the Arden’s production is a very entertaining show that will engage audiences.

The first thing that needs mentioning of the Arden’s production of Stick Fly is the magnificent set. The set has so much attention to detail it is as if you are looking through a window into someone’s home. David P. Gordon is the scenic designer for this production, and his set transports audiences to a vacation home in Martha’s Vineyard. Philadelphia’s own Walter Dallas directs Stick Fly, he also directed Raisin in the Sun last season at the Arden.

The entire cast of this show is outstanding, and they bring to life a thought-provoking cast of characters. Jerome Preston Bates plays the father, 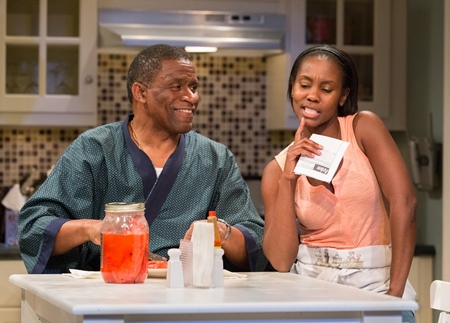 Joe LeVay. Bates brings energy to the role, and he has a quick-paced dialogue that is full of passion. From the time he appears on stage, he seems to be hiding something, but it is not until the end that audiences know what that secret is. Biko Eisen-Martin portrays the youngest son, Kent “Spoon” LeVay. Spoon is a perpetual student, who has a law degree, but is pursuing his heart’s desire to be a writer. Eisen-Martin successfully depicts his character’s fear of disappointing his father, knowing he can never live up to his father’s expectations. Eisen-Martin shows the complexity of this character. Taylor, Spoon’s fiancée, is played by Jessica Frances Dukes.  Taylor’s story is unraveled throughout the show, and Dukes has a task playing this multifaceted character. Throughout STICK FLY, Taylor seems easy enough to like, she is there to meet her fiancé’s parents in hopes of making a good impression. There is so much more to understanding this character, and it is the brilliance of Dukes’s performance that brings out Taylor’s underlying story. Joniece Abbott-Pratt portrays Cheryl, the teenage housekeeper. Abbott-Pratt brings humor to the show; she deals with others in a rather sarcastic way in order to hide her internal struggle with her emotions and feelings. Her performance is flawless, as she has to hide her character’s struggle throughout most of the show.  The oldest brother of the LeVay family, Flip, is played by U.R. Flip is a successful plastic surgeon, who has lived up to his father’s expectations. The challenge that Flip has to deal with is bringing home an “Italian” girlfriend, Kimber, to meet his parents. U.R. is a fine actor, who brings out the immaturity in Flip. In addition, his stance on stage lets the audience see Flip’s charm, but also the character’s complicatedness and internal struggle. Rounding out this phenomenal cast is Julianna Zinkel, who plays Kimber, Flip’s girlfriend. Kimber is the least complicated character through the play, but she brings out the complexity of all the other characters.  Kimber, provides humor, and she explains that she is a “straight up WASP.” Zinkel is admirable playing this privileged and confident character, whose sincerity is questioned by the audience throughout the show. Finally, the cast, a grand set design, and excellent direction make the Arden’s Stick Fly a remarkable comedy and drama.

Do not miss Stick Fly at the Arden Theatre. It is one of the best plays I have seen this season, and one that you will not want to miss. Stick Fly runs through December 22, 2013. For more information and tickets visit their website at www.ardentheatre.org, or call their box office at 215-922-1122.

Photos courtesy of The Arden Theatre

Final Thought: The Arden’s production of Stick Fly is entertaining, there are plenty of laughs as well as a dialogue between the characters about class and race. It is another outstanding show from the Arden.

What a great show this is. This is one of the best we have seen at the Arden.I loved that the audience responded to some of the dialogue the night we were there. Cannot wait to see the rest of the season at the Arden. It is a gem of a theater in Philadelphia.